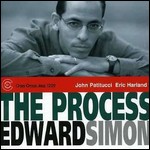 Simon was born into a musical family; both his brothers, Marlon and Michael Simon are also noted professional musicians. His father sent him to the United States at the age of fifteen to study classical piano at the University of the Arts in Philadelphia with Susan Starr, and following this with Harold Danko at the Manhattan School of Music from 1989, As a student he played with Kevin Eubanks and Greg Osby.

In New York City he played with musicians such as Herbie Mann, Paquito D'Rivera, Bobby Hutcherson, Jerry Gonzalez, John Patitucci, Arturo Sandoval, Manny Oquendo, and Don Byron. He was a member of Bobby Watson's band Horizon from 1989 to 1994, and since 2002 a member of the Terence Blanchard Group. He recorded his first album as a bandleader in 1994. In the same year he was a finalist in the Thelonious Monk International Jazz Piano Competition. Then the following year he composed his Rumba Neurotica for the Relache Ensemble. He also composed his Venezuelan Suite on behalf of Chamber Music America.

Simon has played on several Grammy-nominated jazz albums. Besides his trio he also leads the Sexteto Venezuela, the Afinidad Quartet, and the group Simon, Simon & Simon, with his brothers. He teaches at the New School for Jazz and Contemporary Music in New York.

Simon is currently an artist in residence at Western Michigan University.

This article uses material from the article Edward Simon (musician) from the free encyclopedia Wikipedia and it is licensed under the GNU Free Documentation License.

It Ain't Necessarily So [Bonus Track 1] Vince Benedetti
Update Required To play the media you will need to either update your browser to a recent version or update your Flash plugin.