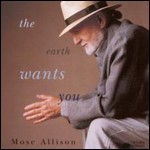 Mose John Allison Jr. (November 11, 1927 – November 15, 2016) was an American jazz and blues pianist, singer, and songwriter.[1] He became notable for playing a unique mix of blues and modern jazz, both singing and playing piano. After moving to New York in 1956, he worked primarily in jazz settings, playing with jazz musicians like Stan Getz, Al Cohn, and Zoot Sims, along with producing numerous recordings.

He is described as having been "one of the finest songwriters in 20th-century blues."[2] His songs were strongly dependent on evoking moods, with his individualistic, "quirky", and subtle ironic humor.[3] His writing influence on R&B had well-known fans recording his songs, among them Pete Townshend, who recorded his "Young Man Blues" for the Who's "Live At Leeds" album in 1970. John Mayall was one of dozens who recorded his classic, "Parchman Farm", and Georgie Fame used many of Allison's songs. Others who recorded his songs included Leon Russell ("I'm Smashed") and Bonnie Raitt ("Everybody's Crying' Mercy").

The 1980s saw an increase in his popularity with new fans drawn to his unique blend of modern jazz. In the 1990s he began recording more consistently. Van Morrison, Georgie Fame and Ben Sidran collaborated with him on a tribute album, Tell Me Something: The Songs of Mose Allison. The Pixies wrote the song "Allison" as a tribute.[4]

Allison's music had an important influence on other performers, such as Tom Waits, Jimi Hendrix, the Yardbirds, the Rolling Stones, and Pete Townshend. He was inducted into the Long Island Music Hall of Fame in 2006.[5]

Allison was born outside Tippo, Mississippi, on his grandfather's farm, known as the Island, "because Tippo Bayou encircles it."[6] He took piano lessons at 5,[7] picked cotton, played piano in grammar school and trumpet in high school,[8] and wrote his first song at 13.[9][10]

Allison attended the University of Mississippi for a while and then enlisted in the U.S. Army for two years.[11] Shortly after mustering out, he enrolled at Louisiana State University, from which he graduated in 1952 with a Bachelor of Arts in English with a minor in philosophy.[12]

In 1956, Allison moved to New York City and launched his jazz career, performing with artists such as Stan Getz, Gerry Mulligan, Al Cohn, Zoot Sims, and Phil Woods.[8] His debut album, Back Country Suite, was issued by Prestige in 1957. He formed his own trio in 1958, with Addison Farmer on bass and Nick Stabulas on drums.

When Allison plays, his words strike you first. There's a subtlety to his lyrics, taking sly jabs at difficult women and Western culture with impeccable wit. His delivery and resonance come off with a coy matter-of-factness, while his no-frills, laid-back singing sets the mood for his jazz trio to lean back and enjoy the ride.
Stratton Lawrence[13]

It was not until 1963 that his record label allowed him to release an album entirely of vocals. Entitled Mose Allison Sings, it was a compilation of songs from his previous Prestige albums that paid tribute to artists of the Mojo Triangle: Sonny Boy Williamson ("Eyesight to the Blind"), Jimmy Rogers ("That's All Right"), and Willie Dixon ("The Seventh Son"). However, an original composition [Correction: Original by Booker T. Washington White, a.k.a. "Bukka" White and "Bucca" White and Washington White, 1906-1977, song titled "Parchman Farm Blues", recorded 1940 after serving time in Parchman Farm Prison 1937-1939, on "Aberdeen Mississippi Blues: The Vintage Recordings 1930-1940, label Document Records DOCD-5679] on the album brought him the most attention: "Parchman Farm". For more than two decades, "Parchman Farm" was his most requested song. He dropped it from his playlist in the 1980s because some critics felt it was politically incorrect. Allison explained in an interview, "I don't do the cotton sack songs much anymore. You go to the Mississippi Delta and there are no cotton sacks. It's all machines and chemicals."[14]

Prestige tried to market Allison as a pop star, but Columbia and later Atlantic tried to market him as a blues artist. Because he sang blues, Jet magazine thought that he was black and wanted to interview him.[15]

His album The Way of the World, released in March 2010, was his first after a 12-year absence from the recording studio.[16] In 2012, Allison was honored with a marker on the Mississippi Blues Trail in his hometown of Tippo.[17] On January 14, 2013, he was named a Jazz Master by the National Endowment for the Arts, the nation's highest honor in jazz, in a ceremony at Lincoln Center in New York.[18]

Allison wrote some 150 songs.[7] His performances were described as being "delivered in a casual conversational way with a melodic southern accented tone that has a pitch and range ideally suited to his idiosyncratic phrasing, laconic approach and ironic sense of humour."[19]

It was said that Allison was a social critic before Bob Dylan and a music satirist before Randy Newman.[5] His music influenced many blues and rock artists, including Jimi Hendrix, the Rolling Stones, Tom Waits, the Yardbirds, John Mayall, J. J. Cale, the Who (who made "Young Man Blues" a staple of their live performances), and Georgie Fame, who described him as "more important than Bob Dylan". Blue Cheer recorded a version of his song "Parchman Farm" on their debut album. The Yardbirds and the Misunderstood both recorded versions of his song "I'm Not Talking". Manfred Mann also recorded a version for the BBC. John Evans, keyboardist for the band Jethro Tull, was influenced by Allison's piano playing, which he described as "so deceptively simple and impressive."[20]

Allison helped open the "blues' racial divide, proving that a white man from rural Mississippi could hold his own in a traditionally black genre."[13] The effort proved difficult, which he described in the lyrics of Ever Since I Stole the Blues", one of his most famous songs: "Well the blues police from down in Dixieland / Tried to catch me with the goods on hand / Ever since the white boy stole the blues."[13][21]

His song "Look Here" was covered by the Clash on their album Sandinista! Leon Russell covered Allison's song "Smashed!" on his album Stop All That Jazz. Allison performed with Van Morrison, Georgie Fame, and Ben Sidran on the album Tell Me Something: The Songs of Mose Allison. Elvis Costello recorded "Everybody's Cryin' Mercy" for his album Kojak Variety and "Your Mind Is on Vacation" for King of America (bonus tracks). Dani Klein, of the Belgian music act Vaya Con Dios, recorded "Mind on Vacation" for the album Roots and Wings.

Frank Black, of the band the Pixies, said that the song "Allison", from their album Bossanova, is about Mose Allison.[22][4] The film The Whole Nine Yards begins with Allison's song "I Don't Worry About a Thing" during the opening credits.[23] Americana singer-songwriter Greg Brown wrote and performed the song "Mose Allison Played Here" for his 1997 album Slant 6 Mind.[24]

The Dutch musician Herman Brood recorded several of Allison's songs, including "Going to the City", "Stop This World", "Back on the Corner", and "Swinging Machine".[25]

Mose married his wife, Audre, in 1949.[13] They lived on Long Island, where they raised four children, including a daughter, Amy, who is a musician.[26] Audre Allison said that when she first met Mose "I could tell that he was someone who generated his own joy."[27] She also said that "Mose has always paid attention to what is happening in the world, and has always read voraciously both past and present histories."[10]

Allison died of natural causes on November 15, 2016, four days after his 89th birthday, at his home in Hilton Head, South Carolina.[28]

Allison was reported to have strong views about "the domination of money over everything, the growing lack of empathy on the part of the powers-that-be for the population, wars and more wars, and an underlying hypocrisy in society"[10] and the arrogance of colonizers of the Americas.[13]

This article uses material from the article Mose Allison from the free encyclopedia Wikipedia and it is licensed under the GNU Free Documentation License.