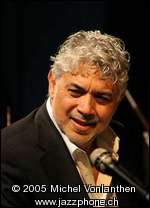 Montgomery Bernard "Monty" Alexander (6 June 1944, Kingston, Jamaica)[1] is a virtuoso jazz pianist and recording artist. His playing has a Caribbean influence and bright swinging feeling, with a strong vocabulary of bebop jazz and blues rooted melodies.[2] Monty was influenced by Louis Armstrong, Duke Ellington, Nat King Cole, Oscar Peterson, and Frank Sinatra. Monty also sings and plays the melodica. He is known for his surprising musical twists, bright rhythmic sense, and intense dramatic musical climaxes. Monty's recording career has covered many of the well known American songbook standards, jazz standards, pop hits, and Jamaican songs from his original homeland. Alexander has resided in New York City for many years and performs frequently throughout the world at jazz festivals and clubs.

Alexander discovered the piano when he was four years old and seemed to have a knack for picking melodies out by ear. His mother sent him to classical music lessons at the age of six and became interested in jazz piano at the age of 14, and began playing in clubs, and on recording sessions by Clue J & His Blues Blasters, subbing for Aubrey Adams, whom he describes as his hero, when he was unable to play.[3][4] Two years later, he directed a dance orchestra (Monty and the Cyclones) and played in the local clubs covering much of the 1960s early rock and pop dance hits. Performances at the Carib Theater in Jamaica by Louis Armstrong and Nat King Cole left a strong impression on the young pianist.

Alexander and his family moved to Miami, Florida, in 1961, where he played in various nightclubs. One night Monty was brought to the attention of Frank Sinatra and Frank's friend Jilly Rizzo. They were there to see the act in the next room, a Sinatra imitator. Somebody suggested they also check out the kid playing piano in the front room bar, "He's swinging the room pretty good" they said. Thus, Monty was invited to New York City in 1962 to become the house pianist for Jilly Rizzo's night club and restaurant simply called "Jilly's." In addition to performing with Frank Sinatra there,[3] Alexander also met and became friends with bassist Ray Brown and vibist Milt Jackson. He also became friendly with Miles Davis, both men sharing a love of watching boxing matches.

In Los Angeles, in 1964, Alexander recorded his first album, Alexander the Great, for Pacific Jazz at the age of 20.[4] The album was very energetic and upbeat with the climax tune being "Blues for Jilly".

Alexander recorded with Milt Jackson in 1969, with Ernest Ranglin in 1974 and in Europe the same year with Ed Thigpen. He toured regularly in Europe and recorded there, mostly with his classic trio for MPS Records. He also toured around 1976 with the steelpan player Othello Molineaux. Alexander has also played with several singers such as Ernestine Anderson, Mary Stallings and other important leaders (Dizzy Gillespie, Benny Golson, Jimmy Griffin and Frank Morgan). In his successive trios, he has played frequently with musicians associated with Oscar Peterson: Herb Ellis, Ray Brown, Mads Vinding, Ed Thigpen and Niels-Henning Ørsted Pedersen.

In the mid-1970s he formed a group consisting of John Clayton on bass and Jeff Hamilton on drums, creating a stir on the jazz-scene in Europe. Their most famous collaboration is Montreux Alexander, recorded during the Montreux Jazz Festival in July 1976.

Alexander formed a reggae band in the 1990s, featuring all Jamaican musicians. He has released several reggae albums, including Yard Movement (1996), Stir It Up (1999, a collection of Bob Marley songs), Monty Meets Sly & Robbie (2000), and Goin' Yard (2001). He collaborated again with Ranglin in 2004 on the album Rocksteady.[3]

This article uses material from the article Monty Alexander from the free encyclopedia Wikipedia and it is licensed under the GNU Free Documentation License.

Tchintchirote Cesaria Evora
Update Required To play the media you will need to either update your browser to a recent version or update your Flash plugin.