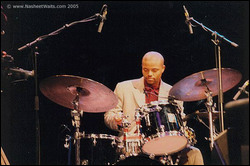 Son of legendary percussionist Freddie Waits; Nasheet is a New York native who has been active on the jazz scene since early in his life. Before pursuing a music career, he studied psychology and history at Morehouse College in Atlanta. Nasheet also holds a degree from Long Island University in music. While studying at L.I.U, instructor Michael Carvln secured Waits a spot in the percussion ensemble M'Boom, started by drummer Max Roach in 1970. Waits has recorded or performed with a myriad of talented musicians including Fred Hersch, Antonio Hart, Joe Lovano, Jason Moran, Andrew Hill, Bunky Green, William Parker, Eddie Gomez, Casimir Liberski, John Medeski, and Mark Turner. Waits currently resides in New York City.[1]

Nasheet Waits like many of his jazz contemporaries before him, has secured a working nickname within the industry: Nasheet "Heavy" Waits.

This article uses material from the article Nasheet Waits from the free encyclopedia Wikipedia and it is licensed under the GNU Free Documentation License.