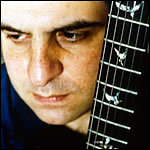 John Parricelli (born 1959) is a jazz guitarist, appearing and recording mainly in the United Kingdom.

In 2011 he appeared on stage with Peter Erskine and John Paul Jones at the Royal Opera House, London in the new opera Anna Nicole. [3]

This article uses material from the article John Parricelli from the free encyclopedia Wikipedia and it is licensed under the GNU Free Documentation License.