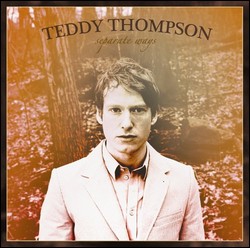 Teddy Thompson (born 19 February 1976) is a British folk and rock musician. He is the son of folk-rock musicians Richard and Linda Thompson and brother of singer Kamila Thompson. He released his first album in 2000.

Teddy Thompson was born in 1976 in a London Sufi commune to folk-rock musicians Richard and Linda Thompson, both major musical figures in the English folk rock scene from the 1960s on. He is the brother of singer Kamila Thompson. He formed his own band at the age of 18 and Teddy moved to Los Angeles to pursue his music career,[1] which included work as a singer and guitar player in his father Richard's band during the 1990s. He appears on at least three Richard Thompson Band recordings from that time: You? me? us?, the live album Celtschmerz (1998) and Mock Tudor (1999), as well as singing a duet on the track "Persuasion", which appeared on Richard's best-of compilation Action Packed (1999). He can be seen performing in his father's band on a number of internet videos from as early as 1993, including an appearance on the BBC's Jools Holland show. He coaxed his mother out of retirement and co-produced her first album in 17 years, Fashionably Late.[1]

He currently resides in and operates out of New York City.

In 2000 Thompson released his debut album, Teddy Thompson, which received much critical acclaim but little commercial success. Between the time of his debut album and follow-up, he released the moderately successful EP Blunderbuss and toured as part of Rosanne Cash's band. His song "Love Her for That" was featured in the 2002 film 40 Days and 40 Nights.

In 2005, Thompson released his second full-length album, Separate Ways. It has a strong "second-generation" artist theme, featuring both Rufus and Martha Wainwright, who are close friends of Thompson. He has toured and recorded with both the Wainwrights, including Rufus' 2003 album Want One.[2] Teddy and Rufus recorded a version of "King of the Road" for the 2005 film, Brokeback Mountain, with Thompson also contributing a solo track: "I Don't Want to Say Goodbye". Separate Ways features Dave Mattacks, Tony Trischka and Garth Hudson of The Band and was produced by Brad Albetta, who also produced Martha Wainwright's much-lauded debut album.

Teddy's third album, Upfront & Down Low, was released on Verve Forecast in the United States on July 17, 2007, and in the UK and Europe later in 2007. The album contains covers of many of Teddy's favorite country songs, plus one of his own compositions, entitled "Down Low". It offers covers of country classics such as George Jones She Thinks I Still Care, Ernest Tubbs Walking the Floor Over You, and Liz Andersons (My Friends Are Gonna Be) Strangers", made famous by Merle Haggard. Lesser-known songs include Felice and Boudleaux Bryants Change of Heart, Dolly Partons bittersweet My Blue Tears, Bob Luman's Lets Think About Living, and the Elvis Presley Im Left, Youre Right, Shes Gone. Six tracks feature string arrangements by English arranger Robert Kirby, renowned for his work with Nick Drake.[3] My Blue Tears features strings arranged by Thompson cohort Rufus Wainwright. The only single taken off Upfront & Down Low was "Change of Heart".

A Piece of What You Need

Thompson's fourth studio album, A Piece of What You Need, was released via Verve/Forecast on June 17, 2008 and contains all original songs. It was produced by Marius de Vries, whom Teddy met while recording background vocals on Rufus Wainwright's Want records in 2002. He had been playing the opening track, "The Things I Do", for several years on tour and originally intended to put it on Separate Ways, but could not get the feel right in time for that album's release. The song "Turning the Gun On Myself" first appeared on the 2004 EP Blunderbuss.

The first single from A Piece of What You Need is "In My Arms". The music video for the song features a cameo appearance by Rufus Wainwright dressed as Elvis Presley. The song entered the UK Singles Chart at #107.[4] The album received rave reviews in the UK, and much critical acclaim elsewhere, with many stating that this album is Thompson's best work to date. A Piece of What You Need debuted at #10 after its first week in the UK Charts during August 2008.

Thompson's fifth studio album Bella was released on February 7, 2011 in Europe and February 8, 2011 in the United States. Bella is Thompson's fourth album released on the record label Verve Forecast. The album is produced by David Kahne, whose previous collaborations include Paul McCartney, Regina Spector and The Strokes. Bella contains all original songs which Thompson started working on after returning from his last tour. Thompson crafted the songs for the album going to a Manhattan office every day homing in as a record deadline drew closer. The album single is called "'Looking for a Girl" and was released on January 13, 2011 on Verve Forecast.

Bella has received positive reviews in the UK and the US with critics praising Thompson for crafting another solid album as a follow up to 2008`s A Piece Of What You Need. Critics also note that this is Thompson`s most personal record to date which yet again shows off his talent as a vocalist and craftsman of both deeply personal and hummable pop tunes.[5][6]

Coming from a family of folk-musicians, Thompson has naturally drawn influences from folk-music into his own musical sound. While still a teenager he was listening exclusively to American music such as Chuck Berry, The Everly Brothers and Buddy Holly. Thompson also later stated that these artists are some of his main musical influences when he first started to write songs (quotation needed). Later when he grew up he began to listen more to contemporary pop music such as Crowded House, and his own musical style today is a mix of folk, country, rock and pop music. As he says himself:

In a video interview he says:

In addition to his tenor singing voice, Thompson plays both the acoustic and electric guitar, and occasionally the ukulele. He has a strong, versatile and expressive voice which he uses both in the higher and lower vocal range with ease, but he apparently prefers using his voice in the middle register while singing. He stated in an interview that his voice was "his only weapon so to speak" in the early years as a vocalist and musician playing in his father's backing band. It has been said that Thompson has inherited much of his singing voice from his mother. He has also been compared vocally to Chris Isaak and Justin Hayward.

On Thompson`s 2011 release Bella many critics comment on the striking vocal resemblance to singer Roy Orbison on many of the songs, especially on Take me back again and Take care of yourself which on the latter Thompson soars into a perfect falsetto at the end of the song evoking the late 1960`s singer.

Thompson's songs are often characterized by their personal and observational style and common use of black humor, such as "Turning the Gun On Myself" and "The Things I Do". He is also known for his ability of writing both personal and wry lyrics with a very melodic style, with such songs like "What's This?!!" and "In My Arms". As a lyricist, he has often been compared to his father, but has developed his own unique writing style. He is also said to have a knack of catching the exact state of mind into his songs, like in "Everybody Move It" and "Slippery Slope".

Teddy has said that "Everybody Move It" was inspired and partly based on personal experience with going out to clubs as a teenager, often ending up in a corner watching everybody else having all the fun.

Recurring themes in Thompson's music are love, loss, the look at fame ("You Made It", "Shine So Bright"), popular culture ("A Piece of What You Need"), and regarding much of his earlier work, self-loathing.

While on his first two albums written songs only in a first-person perspective, Teddy has also explored writing songs in the third person, most notably in "Jonathan's Book".

Rufus Wainwright states on the DVD which accompanied the "Release the Stars" album that the song "Nobody's Off the Hook" is about his friendship with Thompson.

This article uses material from the article Teddy Thompson from the free encyclopedia Wikipedia and it is licensed under the GNU Free Documentation License.