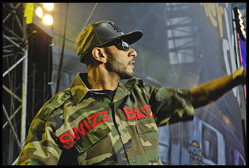 Kasseem Dean (born September 13, 1978),[n 1] better known by his stage name Swizz Beatz, is an American hip hop recording artist, record producer, and composer from New York City, New York. Born and raised in The Bronx, he began his music career as a disc jockey (DJ) and has since added rapper, record executive, creative director, fashion designer and painter to his repertoire. At the age of 16, he gained recognition in the hip hop industry through his friendship and work with East Coast rapper DMX and the Ruff Ryders Entertainment record label. He later found a protégé in Philadelphia-based rapper Cassidy, whose success helped the launch of Dean's label, Full Surface Records. Dean has so far released two of his albums under the label; the first, a compilation titled Swizz Beatz Presents G.H.E.T.T.O. Stories, released in 2002 and his debut studio album One Man Band Man, released in 2007.

About.com ranked him #27 on its list of the "Top 50 Greatest Hip-Hop Producers,"[1] while The Source placed him on its list of the "20 greatest producers" in the magazine's 20-year history.[2] Fellow American rapper and music producer Kanye West, has also praised Dean, calling him "the best rap producer of all time."[3] Dean is married to American R&B singer-songwriter Alicia Keys, with whom he has one child. He has also fathered three other children, including one with ex-wife American R&B singer-songwriter Mashonda and another with English singer-songwriter and producer Jahna Sebastian.

Due to his parents' separation in his early life, Dean did not see much of his postal worker father. He spent much of his childhood raised by his mother in the South Bronx, where he first encountered hip hop. After obtaining the necessary equipment from his stepfather and uncles, he began deejaying as a teenager and enjoyed a modicum of success.

After relocating to Atlanta, Georgia due to his repeated involvement in violent behavior at Harry S. Truman High School, he started to work for his uncles, Joaquin and Darrin Dean, who were co-CEOs of the Ruff Ryders record label. In his early work, he generally chose not to sample, instead using the Korg Trinity and Triton keyboards and seeking to accentuate the performance aspect of his music.

With his aunt Chivon and uncles Dee and Waah Dean all involved with the Ruff Ryders label, he began to produce tracks at age 16. A year later he sold his first beat to DMX, which became his chart-topping single "Ruff Ryders' Anthem". Then, he produced major hip-hop songs released in 1998 such as "Banned from T.V." by Noreaga, "Money, Cash, Hoes" by Jay-Z and more, which had produced at the age of 19. The following year, he produced most of the songs of the Ruff Ryders compilation album Ryde or Die Volume 1 and also produced Eve's first album. In 2001, in a joint venture with Clive Davis, he established his own record label, Full Surface, which became a subsidiary of J Records.[4] The first artist signed was Philadelphia-based rapper Cassidy. When Dean released his first compilation album Swizz Beatz Presents G.H.E.T.T.O. Stories, in 2002, it was then that he started to get noticed for his production style and interesting ideas, and Cassidy began to gain recognition for his ability as well. The same year, he released two singles "Guilty" and "Bigger Business", both of which charted on the Hot R&B/Hip-Hop Songs, as well as being accompanied by music videos.[5] Along with often being associated with Ruff Ryders and Roc-A-Fella Records, Dean began to expand his scope to include production of artists from more mainstream labels such as Elektra, Atlantic, Epic, Def Jam and Bad Boy Entertainment. His career largely grew from that point.

On August 21, 2007, Swizz Beatz released his debut studio album, One Man Band Man.[7] The album, preceded by the lead singles "It's Me Bitches" and "Money in the Bank", sold 45,000 copies in its first week.[7][8] Two months later on October 19, he launched a contest called "Share the Studio", presented by Music Video 2.0 and The Source magazine. The contest was intended to be a continuation of the work from his debut album.[9]

Undaunted by the disappointing sales of his last album, Swizz Beatz began working on his second studio album soon after the release of his first. In late 2007, in an interview with Format Magazine he announced the title as Life After the Party saying:

On April 24, 2009, he released a promotional song for Hennessy Black, entitled "When I Step in the Club". A music video, directed by Hype Williams, was also released.[14] On August 23, 2010 he revealed the album's title would instead be Haute Living.[15]

While being interviewed on BBC Radio he announced that he was planning to release it on September 13, to coincide with his birth date.[16] Rather than being released under his own imprint, the album was actually released under his legal contract with Everest Entertainment/Atlantic/Warner, who signed the rapper in August 2010. Confirmed guest appearances include his wife Alicia Keys, Bono, Travis Barker, Kanye West, Lil Wayne, Jay-Z, Lenny Kravitz, Mary J. Blige and John Legend.[17]

On February 12, 2010, he and 81 other artists including Kanye West, Lil Wayne, Justin Bieber, Miley Cyrus, Jamie Foxx, Will.i.am, and Usher, debuted "We Are the World 25 for Haiti" during the Opening Ceremonies of the Winter Olympics in Vancouver. Inspired by GOOD Fridays the 2010 weekly series of free mp3s from Kanye West, Swizz Beatz launched his own series entitled Monster Mondayslater that year. The first offering, "DJ Play that Beat" featured Estelle, and was released on October 25. Other Monster Monday tracks feature Rakim, Pusha T, DMX, Busta Rhymes, Pharrell and many more.[18][19]

His first Grammy Award came in 2011, awarded in the category of Best Rap Performance by a Duo or Group for a track entitled "On to the Next One" teaming him with American rapper Jay-Z. The first promotional single from Haute Living was entitled "Everyday (Coolin')", features a verse from Eve, was produced by Joe Lindsay, and was released through monstermondays.com on March 28, 2011.[20] He revealed during an interview with Paper Mag, that a few yet-to-be-released special collaborations will appear on the album including one titled "Skyscrapers" featuring Kanye West and Bono.

Swizz Beatz and his Monster Music Group signed a joint venture with Imagem Music USA. In a press release, the artist confirmed his excitement at his upcoming partnership with Richard Stumpf and the entire group over at Imagem Music. saying: "This partnership will enable me to further develop my group of talented producers and also introduce many new producers and writers to the world. Protegé Tyrone Johnson and Naki "Snagz" Levy are the first acts to sign with Monster Music Publishing,[22] and on May 21, 2011, he further confirmed that Dr. Dre was working on the album with him.[23]

On March 7, 2012, Swizz Beatz announced that he would be releasing a mixtape titled Limitless, featuring guest appearances from DMX, Nas, Rick Ross, The LOX and ASAP Rocky, the latter of whom is featured on the first single, "Sreet Knock".[24] On March 22, 2012, "Street Knock" featuring ASAP Rocky was premiered on "The Angie Martinez Show".[25]

In October 2012, at the 2012-2013 New York Knicks Season Tip-Off event at the Beacon Theater on 73rd Street and Broadway, special guest Swizz Beatz performed a 10 minute medley of his hits alongside the New York Knicks' City Dancers and premiered the starting line-up theme song for the upcoming season, which he produced.[26][27]

In 2009, Swizz Beatz produced many popular singles including "Nasty Girl" by Ludacris featuring Plies, "Who's Real" by Jadakiss featuring OJ da Juiceman, "Million Bucks" by Maino, "Million Dollar Bill" by Whitney Houston, "I Can Transform Ya" by Chris Brown featuring Lil Wayne and "On to the Next One" by Jay-Z.[4]

In 2003, he became a partner involved in the popular clothing company Kidrobot, a creator and retailer of limited-edition art toys and clothing.[4][32]

Swizz Beatz not only collects paintings but also paints in his free time. He donates the money he earns from his paintings to the Children's Cancer & Blood Foundation.[35]

In early 2013, Swizz Beatz invested in and joined the board of Monster, and became involved in product management and marketing activities.[37][38] Monster products that he is promoting include the Monster GODJ[39] and the Monster 24K headphones.[40]

Dean is a believer of the Muslim faith.[41][42] On October 25, 2000, his first son with Nicole Levy, Prince Nasir Dean was born. In 2004, he married Mashonda, together they have one child. In April 2008, they announced their plans to divorce after four years of marriage. In May 2009, it was confirmed that Dean and Alicia Keys were in a relationship after almost a year of speculation. In May 2010, Beatz confirmed he was engaged to Alicia Keys, and that she was pregnant with his fourth and her first child.[43] During the time of the 2010 FIFA World Cup, the couple took part of a union and had the unborn child blessed in a Zulu ceremony, which took place in the Illovo suburb of Johannesburg, South Africa.[44] Dean married Alicia Keys on the French island of Corsica on July 31, 2010.[45] Alicia Keys gave birth to their son on October 14, of that year.[46][47]

Swizz Beatz also has a daughter named Nicole Dean, with a Russian singer who lives in London named Jahna Sebastian.[48] In May 2011, Beatz flew to London to celebrate his daughter's birthday along with two of his sons.[48] In April 2014, Dean was accepted into Harvard Business School.[49]

This article uses material from the article Swizz Beatz from the free encyclopedia Wikipedia and it is licensed under the GNU Free Documentation License.