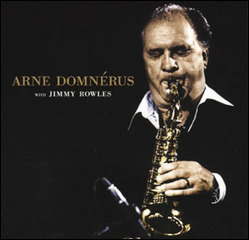 He began to play the clarinet at the age of 11, but had taken up the saxophone by the time he left school and then turned professional. In 1949 he performed at the Paris Jazz Festival,[1] and played with Charlie Parker when he made his tour of Sweden in 1950. Later in 1953, he recorded with visiting American players such as James Moody, Art Farmer and Clifford Brown. Domnérus worked with the Swedish Radio Big Band from 1956 to 1965 as a featured soloist,[1] and wrote for television and films. He also recorded extensively over the course of his career with Bengt Hallberg and Lars Gullin.[2] Together with fellow Swedes Bengt-Arne Wallin, Rolf Ericson and Åke Persson (the latter two both former members of Duke Ellington's Orchestra), he participated at the Jazz Workshops, organised for the Ruhrfest in Recklinghausen by Hans Gertberg from the Hamburg radio station. He recorded several times with Quincy Jones in Sweden and is featured throughout 'The Midnight Sun Never Sets', composed and arranged by Jones and recorded under Jones' direction by Harry Arnold's orchestra in 1958. Domnérus' playing in his early career was typical of the 'cool', sophisticated, technically accomplished and lyrical style of Swedish modern jazz of the 1950s.

Domnérus' health declined in his last years and he was forced to retire from playing.[1]

With Benny Bailey and Åke Persson

This article uses material from the article Arne Domnérus from the free encyclopedia Wikipedia and it is licensed under the GNU Free Documentation License.

Another Call Müller, Michel & Demoulin
Update Required To play the media you will need to either update your browser to a recent version or update your Flash plugin.