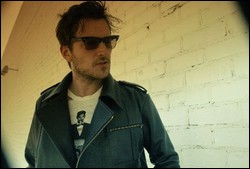 Bradley Glenn "Butch" Walker (born November 14, 1969) is an American recording artist, songwriter, and record producer. He was the lead guitarist for the metal band SouthGang from the late 80s to early 90s as well as the lead vocalist and guitarist for rock band Marvelous 3 from 1997 until 2001.

Walker grew up in Cartersville, Georgia, working as a guitarist and performer in several rock bands in the 1980s, including Badd Boyz and Byte the Bullet. In 1988, he took Byte the Bullet to Los Angeles and they were signed to Virgin Records within the year. The band then changed their name to SouthGang and released two albums, Tainted Angel in 1991 and Group Therapy in 1992. SouthGang was one of the first bands to tour China in the early 1990s. Southgang disbanded when the record company messed with their contract and tried to send them in the wrong direction. but he remained on good terms with all the other members of the band.[1]

After Southgang, Walker formed a new band with ex-SouthGang members Jayce Fincher and Mitch McLee (aka: Doug Mitchell), calling themselves Floyd's Funk Revival after Walker's birthplace Floyd County, Georgia.[1] Walker shared lead vocals in the band with Fincher's wife, Chrystina Lloree. They released one full length album, Creamy. The album contained thirteen original tracks with Lloree taking a large share of the lead vocals and heavy reliance on guitar. The band then shortened their name to The Floyds. They released one self-titled album on the Deep South label, which contained ten original tracks along with a humorous intro piece. Bonus tracks included a cover of Duran Duran's "Rio", and a live rendition of the Shasta soda jingle from the late seventies. The style of both these albums was guitar-oriented, mainstream rock with mild funk influences, and was a forerunner to the more basic guitar-oriented rock approach Walker took later with Marvelous 3. Although the albums are highly regarded among the people who discovered them, they failed to sell many copies, and both albums are now quite rare. They are highly coveted by fans of Butch Walker, and the few copies that surface in the used CD market today command very high prices.

In 1997, Walker, Fincher, and McLee transformed themselves again, scaling back to a trio with Walker handling all the lead vocals. They also decided to streamline their sound to more of a "power pop" type of band. Calling themselves Marvelous 3, they released the album Math and Other Problems on Deep South Records in 1997. They followed this in 1999 with Hey! Album on Elektra Records and had a minor hit with the song "Freak of the Week." The next year, they released their final album, ReadySexGo, also on Elektra. That album failed to continue the momentum created by the prior release, however, and perceiving a lack of support from their record label, they disbanded in 2001. Their final concert was on August 3, 2001 at Atlanta's Centennial Olympic Park in front of their hometown fans.[2]

Butch Walker then began a solo career, releasing the albums Left of Self-Centered in 2002, Letters in 2004 and The Rise and Fall of Butch Walker and the Let's-Go-Out-Tonites in 2006. In 2005 he played over 200 live shows across both the U.S. and Japan, and he released his first DVD, Live at Budokan. At the end of 2005 he was named as Rolling Stone's producer of the year. Butch Walker was featured as a headlining artist on the MySpace-promoted Inaugural Hotel Cafe tour, supporting independent artists from the Los Angeles venue of the same name.

Butch Walker began 2008 by setting out many dates for new songs, DVDs, new albums both with the band 1969, which he is the bassist and lead singer for, and also a solo record titled Sycamore Meadows. He stated that he was planning to release something on every major holiday in 2008. On February 14, 2008, an audio release of Walker's live performance in his hometown of Atlanta, GA, was released. A DVD of this show followed on March 17, 2008. The DVD and audio are titled Leavin' the Game on Luckie Street (Luckie Street is the road the venue at which the show was played, the Tabernacle in Atlanta, GA). Then working with Michael Chislett of The Academy Is... and Darren Dodd of The Let's Go Out Tonites under the name 1969 released a full-length debut album titled Maya on April 1, 2008.[3] Sycamore Meadows was originally slated for a holiday release in the summer of 2008, but was postponed due to personal reasons until November 11, according to his MySpace blog. The first single from Sycamore Meadows was the first track, titled "The Weight of Her". The video for "Ships in a Bottle" documents Walker walking on the grounds of his home on Sycamore Meadows Drive in Southern California after it was destroyed by the wildfires of November 2007. Both Maya and Sycamore Meadows were released on a limited run of vinyl.

Walker played a series of sold-out live shows with just acoustic guitar and vocals beginning in fall 2009, accompanied at various times by Pink, actor Jeremy Piven, Jim Bianco, the Chapin Sisters and doctor Stephen Patt on steel guitar. Out of the shows came a cover of Taylor Swift's single "You Belong with Me" on banjolin, which was later recorded as a video and audio version in his studio. Swift blogged about the video and then invited Walker to appear with her at the winter 2010 Grammy Awards.[4]

Walker began work on his next album in 2009, and ultimately released I Liked It Better When You Had No Heart on February 23, 2010 under the band name Butch Walker & the Black Widows. Recording sessions were held at RubyRed Productions in Santa Monica, California. Walker support of the record included touring with Train beginning March, 2010, a headlining tour of the US, and opening for Pink in Europe on her Stadium Festival Tour.

In late 2012, Butch Walker was featured on the show Live From Daryl's House on Palladia network.

In July 2009, Butch Walker worked with Weezer on their album Raditude. Walker mentioned working with the band during a radio interview with 99X. He was being interviewed via phone along with Cee Lo Green from Gnarls Barkley who was in the actual studio. Walker co-wrote and produced several songs on Raditude, including the first single, "If You're Wondering if I Want You To... (I Want You To)", which hit number two on the Modern Rock Chart.

In 2007, Walker provided guest vocals on Fall Out Boy's third record Infinity on High, on the track "You're Crashing, but You're No Wave", and co-produced the track "Don't You Know Who I Think I Am?" with singer Patrick Stump. He also made a brief cameo in the video for "This Ain't A Scene, It's An Arms Race".

Walker also appears in The Academy Is... videos for "Slow Down" and "We've Got a Big Mess on Our Hands" as well as the video for "So What" by Pink. He also co-wrote the songs "Breaking" and "Younglife", both of which are performed and co-written by Anberlin.

Walker also joined the 9th annual Independent Music Awards judging panel to assist independent musicians' careers.[8] He was also a judge for the 8th annual Independent Music Awards.[9] In 2008 Walker signed on to judge a competition called Spin's Hot Pursuit to find an unsigned band for Epic Records/Original Signal hosted on Music Nation.[10] He had previously served as a guest judge for the CBS reality television show Rock Star: Supernova and produced the band's first album.[11]

In March 2009, the song "Open Happiness" debuted, a new business venture by Coca-Cola, written by Walker, and featuring Cee Lo Green, Travis McCoy, Janelle Monáe, Patrick Stump and Brendon Urie. This song has a Cantonese cover version by Joey Yung on her new album, A Time For Us, and she is also filming advertisements for Coca Cola in Chinese.

Many of his songs have been hits for other artists, including Avril Lavigne, Sevendust, Injected, The Donnas, Hot Hot Heat, American Hi-Fi, Default, Gob, Midtown, Puffy AmiYumi, Pete Yorn, Fall Out Boy, Quietdrive, The All-American Rejects, SR-71, The Academy Is... and recently The Cab, Saosin, Never Shout Never, Weezer, Dashboard Confessional and All Time Low.

The documentary Out of Focus premiered at the Nashville Film Festival in April 2012. Directed by Shane Valdés and Peter Harding, it focuses on Butch Walker's life and music. Its first European showing occurred in the context of the Oldenburg Filmfest, Germany (August 2012).

As a child, Walker struggled with undiagnosed dyslexia.[12] He also had weight problems. When he graduated high school, he says that he weighed 215 lbs but subsequently dropped to 165 lbs.[13] In November 2007, Walker and his family lost all of their possessions, including the masters to every song he had ever recorded, when the Malibu home he was renting from Flea of the Red Hot Chili Peppers burned down as a result of a wildfire in Southern California.[14] He titled his next album Sycamore Meadows after the street the house was on.

This article uses material from the article Butch Walker from the free encyclopedia Wikipedia and it is licensed under the GNU Free Documentation License.

The world is falling down Abbey Lincoln
Update Required To play the media you will need to either update your browser to a recent version or update your Flash plugin.