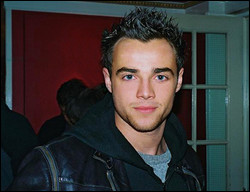 Benjamin "Ben" Stevens Adams (born 22 November 1981) is an English singer-songwriter, best known as a member of the popular boy band A1.

Ben was born Benjamin Anthony Edward Stephens on 22 November 1981 in Bracknell, Berkshire to Anthony W Stephens and his wife Anita (née Olpherts-Forrester). His parents subsequently divorced and, when Ben was 8, in January 1990, his mother, Anita, married businessman Jeremy Adams, and Ben then took the name Benjamin Stephens Adams.

Ben grew up in Middlesex, in a modest house listening to the likes of Madness, James Taylor, Michael Jackson and Tracy Chapman on his mum's stereo. Raised single-handedly by his mum without much spare cash around, Ben found that from singing solo in school assembly to picking up classical piano, oboe and violin in music lessons, and then combining all that with an emerging passion for musicians like Prince, Queen and Stevie Wonder, he could escape into the world of music. And while it may seem unlikely in the context of the drinking, dirty dancing and dubious circle exploits of new songs like "Get Off My Girl", at only ten years old, a cherubic Ben Adams was one of the UK's top choristers.

Having won a scholarship based on his musical talents he found himself based at St Margaret's Westminster Abbey, regularly performing for some eminent audiences (The Queen, The Pope), touring through all the major cities in Europe with the Choir, all leading up to recording two classical albums - "Benedicamus Domino" and "Laudate Pueri". The experience would prove useful for his next career step. "If you are classically trained, which I was, it pretty much equips you to sing any kind of music. I'm thankful I was taught to sing at such a young age because it teaches you how to maintain your voice, which is really important, especially when you're on tour."

His experiences in the choir turned him onto all types of music. "Anything to do with music excited me. I remember sitting at home every Friday watching Top Of The Pops, and wanting to be on it so much. I'm very lucky the way things panned out."

In 1997, Ben joined a band called A1 and between 1999 and 2002 they scored 3 albums, a string of number ones and Top 10 hits across the globe, - all but two of which were written or co-written by Ben. A1's finest hour came with the first single from their third album. Kick-started by Ben during a frustrating group songwriting session, "Caught In The Middle" was ostensibly about an unhappy love triangle, but with hindsight its themes spotlit the musical tensions facing A1 as they approached their third album, and signalled a huge change in musical direction for the band.

Gone on that third album were the high-octane disco stylings of the band's first two albums. In their place was a sophisticated guitar sound courtesy of sought-after producer Mike Hedges (U2, Travis, Manic Street Preachers), who had been invited to work on a handful of songs and was so impressed with the band's songwriting that he stayed for the whole album. "Caught In The Middle" became one of A1's best selling singles; a reward, for Ben, that proved versatile songwriting had a place in the charts and that pop fans are only too happy to be challenged. "A1 was a great experience. I am a lot wiser to the industry so I can avoid the usual mistakes people make first time round. It's like anything - the more you do it, the better you are at it."

When A1 came to a natural end, Ben was bombarded with all the predictable offers of work you might expect to head in the direction of someone who public persona had been permitted to extend little further that floppy hair and occasional winks to camera. In spite of having left A1, his record label Sony, his publishing company and his management, Ben turned them all down flat. "I was looking at the bigger picture," he remembers, "and I didn't want anything along the way to ruin it. He called Mike Hedges, and asked the producer for his advice on what equipment would be necessary to build up his own demo studio into something with which he could make hit records. One hefty investment later, Ben was ready to start work. Ben recorded an album 'Its Brutal Out There' which has still to be released. Talking of his writing own album - "The songs on the album are about my life, and the things I've experienced. Although I'm only 25, I've already been through a lot. Writing songs for me is like writing a diary, except one that can be read by everybody." Ben's is state-of-the-art pop music, as broad in its influences.

As well as writing for himself, Ben set up Parkbench Studios and turned his attention to also writing and producing for and with other artists (some already established and a handful of up and coming acts) both here and in the US. Artists include Alexandra Burke, Robin Thicke, Craig David and Harmar Superstar.

A1 reunited in August 2009 and are currently signed to Universal Music Norway on a worldwide deal. The band have recently completed a 58 date tour and their recent album "Waiting for Daylight". In 2011 they plan to take the album worldwide.

This article uses material from the article Ben Adams from the free encyclopedia Wikipedia and it is licensed under the GNU Free Documentation License.