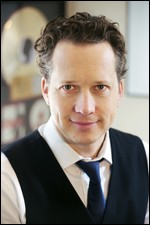 Chris Walden (born October 10, 1966 in Hamburg, Germany) is a German composer, arranger, and conductor living in the U.S. He leads his own jazz big band, the Chris Walden Big Band,[1] based in Los Angeles and was nominated five times for a Grammy award.

He is probably best known for writing big band and orchestral arrangements for recording artists such as Michael Bolton, Christina Aguilera, Jennifer Hudson, Paul Anka, and Christopher Cross. He has been an arranger for "American Idol" since 2007 and has worked for producers like David Foster,[2] Phil Ramone, and Tommy LiPuma.

Chris Walden grew up in Hamburg, Germany where he learned to play the recorder at age 5, the piano at age 8, and the trumpet at age 13, which then became his main instrument. He started writing arrangements for local school big bands at age 16. He graduated from high school at age 19 and went on to study popular music at the Music Academy in Hamburg. At age 21 he moved to Cologne, Germany to study with trumpeters Jon Eardley and Malte Burba and arranger Jerry van Rooyen at the Cologne University of Music. He graduated in 1994 with two Masters of Music in trumpet and composition/arrangement.

In 1987 he joined the then newly formed German National Youth Jazz Orchestra (BuJazzO)[4] as a trumpet player. Its leader Peter Herbolzheimer early on noticed Walden's interest in arranging and composing and became an important mentor for Walden.

Chris Walden started to work professionally as a musician in his teens playing the trumpet in dance bands on weekends while still attending high school in Hamburg. He received his first professional arranging assignments through his mentor Peter Herbolzheimer and after moving to Cologne he went on to write arrangements for many of the German radio big bands and radio symphony orchestras. He continued to play trumpet at various studio recordings and musical theater.

In 1991 he assisted Peter Herbolzheimer in orchestrating the music to the German feature film "Schtonk!", which received an Oscar nomination in the category "Best Foreign Language Film". This led to work as a composer for more feature films and many TV movies and series in Germany, and Walden quickly became an in demand film composer in Germany.

He served as the musical director for four years for the televised German Movie Award show "Deutscher Filmpreis".[5]

Migrating to the U.S.

In 1996 at the age of 29 Chris Walden moved to Los Angeles. There he scored TV movies for ABC, CBS, A&E, the Hallmark Channel, and the SciFi Channel. He wrote arrangements for recording sessions of singers Christopher Cross, Michael Bolton, Renee Olstead,[2] Nancy Wilson, and Paul Anka.

But even in Los Angeles, Walden kept on working occasionally for German TV or album projects, incl. Till Brönner,[6] Al Bano,[7] and David Hasselhoff.[8]

In 1999 he founded his own big band, the Chris Walden Big Band,[1] which consists of Los Angeles based studio musicians. With this band he recorded three albums, of which the first one garnered two Grammy nominations in 2005.[9] The band frequently plays in and around Los Angeles.

In 2007, during the 3-month strike of the Hollywood screenwriters, Walden composed his first major concert work, "Symphony No.1 - The Four Elements". The recording with the Hollywood Studio Symphony which Walden conducted earned two Grammy nominations in 2008.[11]

In recent years Walden has been working as an arranger for "American Idol" since 2007. He also arranged for TV appearances of Faith Hill, Christina Aguilera, Katie Holmes, Aretha Franklin, Yolanda Adams, Melissa Etheridge, and many more. In 2009 he arranged the National Anthem for Jennifer Hudson's performance at the Super Bowl XLIII.[12]

So far Walden's works encompass 40 feature and TV films, more than 100 episodes of TV series, and more than 1000 arrangements for big band or symphony orchestra.

In addition to more than 100 albums for which Walden arranged, composed, and produced, the following are Walden's albums under his own name:

This article uses material from the article Chris Walden from the free encyclopedia Wikipedia and it is licensed under the GNU Free Documentation License.

Green Fields Nils Landgren
Update Required To play the media you will need to either update your browser to a recent version or update your Flash plugin.