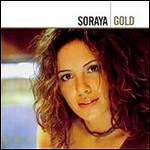 A successful Colombian music star, she had two number-one songs on Billboard's Latin Pop Airplay charts. She won a 2004 Latin Grammy Award for the self-titled album "Soraya" as "Best Album by Songwriter", which she produced, and a 2005 Latin Grammy Awards nomination for "Female Pop Vocal Album" for her album El Otro Lado de Mí (literally "The Other Side of Me"). She was the opening act for the 2005 Billboard Latin Music Awards. Her career spanned ten years, and she recorded five albums. Soraya died on May 10, 2006 following a long struggle against breast cancer.

She was born Soraya Raquel Lamilla Cuevas in Point Pleasant, New Jersey, a year after her father, mother, and brother moved to the United States from their native Colombia. The family moved back to Colombia when she was a baby, but when Soraya was eight years old, they returned to New Jersey.[1] "Soraya" is a very common name in the Middle East, and its meaning can be translated "rich" or "princess".[2] Soraya's maternal relatives were Lebanese Christians who emigrated from Lebanon to Colombia.[3] Soraya's mother, Yamila Cuevas Gharib, had been a housewife in Colombia. Soraya's father, Gregorio Lamilla, worked for an exporting company in Colombia; in the U.S., life was hard for the family, so to make ends meet, he worked three or four jobs.

Soraya first became interested in music at age 5 when she heard her uncle playing music in Colombia. Her uncle played "Pueblito Viejo", a Colombian traditional folk song using an instrument called the tiple, which is a kind of guitar with triple strings. Her parents bought her a guitar, which she taught herself how to play. She became proficient in classical violin, and her first 'public' performance was at Carnegie Hall in New York City as a member of the N.Y.C. Youth Philharmonic. She was valedictorian of her class at Point Pleasant Boro High School, where she began writing her own music.[1][4]

Soraya was 12 years old when her mother was first diagnosed with breast cancer, 18 when her mother had a recurrence, and 22 when her mother died in 1992. Soraya had said that her sense of responsibility increased because she needed to take care of her mother and do all the household chores. She would also accompany her mother to the doctor's office; together they did breast-cancer research and participated in the Race for the Cure.[3]

Soraya attended Rutgers University in New Jersey, where she studied English literature, French philosophy, and women's studies. Initially, she worried that she might be too shy to play before big crowds, but she eventually triumphed over her fear and realized her tremendous talent as a live performer when she played to rapt audiences at coffee houses and rallies around the sprawling Rutgers campus. She worked as a flight attendant before starting her music career.[1]

Soraya obtained a record contract with Polygram Records/Island Records in 1994. Her first album, released two years later simultaneously in both English and Spanish was titled "On Nights Like This / En Esta Noche". Both versions received positive critical acclaim and enabled her to tour in the U.S., Latin America, and Europe, as a guest performer in concerts for famous musicians such as Natalie Merchant, Zucchero, Sting, Michael Bolton, and Alanis Morissette.

Her songs climbed to the top of the charts just about everywhere in Latin American, European, and U.S.' Hispanic markets. Her first single "Suddenly/De Repente" reached #1 in Billboard Latin Pop listings, with the English version receiving some mainstream Adult Contemporary airplay. Her second album, Torre de Marfil / Wall of Smiles, titled after a song co-written with her idol Carole King was released in late 1997, and helped her attain worldwide recognition.

Unfortunately, in 2000, she was diagnosed with Stage III breast cancer, shortly after the release of her third album Cuerpo y Alma / I'm Yours just days before she was about to tour and promote it. She took time off to fight the illness.

Feeling healthy and in remission, Soraya returned to the music scene in 2003 with the release of her fourth and self-titled album Soraya. The songs reflected her struggles, beliefs, and love for life. She composed, produced, and arranged the album, which won the Latin Grammy for "Best Album by a Singer-Songwriter".

She created one more successful album, El Otro Lado de Mí, before she finally succumbed to cancer in 2006.[1]

Soraya died of breast cancer on May 10, 2006, aged 37. She was first diagnosed in 2000, at the age of 31, after finding a lump while conducting a routine self-examination. She was diagnosed at Stage III and had a double mastectomy and breast reconstruction as well as radiation therapy and chemotherapy. In addition to her own death, Soraya lost her mother, a grandmother, and a maternal aunt to breast cancer.

Soraya was an advocate of breast cancer support and education, especially for Hispanic women. Soraya became the first Latin spokesperson for the Susan G. Komen Breast Cancer Foundation, touring the Americas to raise awareness. During September and October, she took a break from her music career to focus on breast cancer awareness.[3]

In order to encourage other women like herself, Soraya wrote and recorded "No One Else/Por Ser Quien Soy", a song that reflects her experience in fighting breast cancer. Both tracks can be downloaded on her official website. All proceeds benefit the Susan G. Komen Foundation.

"I know there are many questions without answers, and that hope doesn't leave with me, and above all, that my mission does not end with my physical story" were Soraya's last words to her fans and the media before her death.

This article uses material from the article Soraya (musician) from the free encyclopedia Wikipedia and it is licensed under the GNU Free Documentation License.

A Cappella In Acapulco Voxtasy
Update Required To play the media you will need to either update your browser to a recent version or update your Flash plugin.