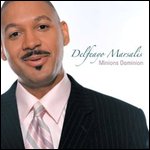 Marsalis was born in New Orleans, the son of Dolores (née Ferdinand) and Ellis Louis Marsalis, Jr., a pianist and music professor.[1] He is also grandson of Ellis Marsalis, Sr., brother of Wynton Marsalis (trumpeter), Branford Marsalis (saxophonist), and Jason Marsalis (drummer). Delfeayo has two brothers who are not musicians, thus there is not as much mention about them in the media: Ellis Marsalis III (b. 1964) is a poet, photographer and computer networking specialist based in Baltimore. Mboya Kenyatta (b. 1970) is autistic and was the primary inspiration for Delfeayo's founding of the New Orleans-based Uptown Music Theatre. Formed in 2000, UMT has trained over 300 youth and staged 8 original musicals, all of which are based upon the mission of "community unity."

While a gifted trombonist, Delfeayo has recorded relatively few albums and is both more prolific and better known for his work as a producer of acoustic jazz recordings. Along with Tonight Show engineer Patrick Smith, Delfeayo coined a phrase that was primarily responsible for the shift in many jazz recordings from rock and roll production to the resurgence of acoustic recording. "To obtain more wood sound from the bass, this album recorded without usage of the dreaded bass direct" first appeared on brother Branford's Renaissance (Columbia, 1987), and became the single sentence to define the recorded quality of many acoustic jazz recordings since the late 1980s. He is a graduate of Berklee College of Music, and in 2004 received an MA in jazz performance from the University of Louisville.

Marsalis, with his father and brothers, are group recipients of the 2011 NEA Jazz Masters Award.[2]

This article uses material from the article Delfeayo Marsalis from the free encyclopedia Wikipedia and it is licensed under the GNU Free Documentation License.

Love Me Or Leave Me Sarah Peng & John Ward Trio
Update Required To play the media you will need to either update your browser to a recent version or update your Flash plugin.