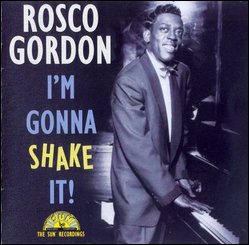 Gordon was born in Memphis, Tennessee. He was a pioneer of the Memphis blues style[3] and in the late 1940s and early 1950s was associated with Johnny Ace, Bobby Bland and B.B. King, sometimes referred to as the "Beale Streeters".[4] He made a number of his early recordings for Sam Phillips at Sun Records.[4] Gordon played piano in a style known as "the Rosco rhythm", with the emphasis on the off-beat. This rhythm was an influence on the Jamaican pianist Theophilus Beckford and hence on reggae music as a whole.[3]

"Booted" and "No More Doggin'" were both released in 1952.[3] Phillips sold the master of "Booted" to both RPM (owned by the Bihari brothers) and Chess Records (owned by Leonard and Phil Chess), and both labels released the track as a single.[4] The RPM release reached number one on the Billboard R&B record chart.[2] Chess and the Bihari brothers later settled the conflict, with the Biharis getting exclusive rights to Gordon and Chess signing Howlin' Wolf to an exclusive contract.[5]

Gordon's last single to reach the charts was "Just a Little Bit" (1960).[2][3] In 1962, he quit the music industry and moved to Queens, New York City, with his new wife, where he purchased a partnership in a laundry business. Following his wife's death in 1984, he returned to performing in the New York area.

In 2002, he was invited by the filmmaker Richard Pearce to be included in a documentary film about several blues musicians returning to Memphis for a tribute to Sam Phillips in conjunction with the May 2002 W.C. Handy Awards. The documentary, The Road to Memphis, aired on PBS television. Six weeks after filming finished, Gordon died of a heart attack at his apartment in Rego Park, Queens.[4] He was 74 years old.[4] He was interred in the Rosedale Cemetery in Linden, New Jersey.

This article uses material from the article Rosco Gordon from the free encyclopedia Wikipedia and it is licensed under the GNU Free Documentation License.

Sophisticated Lady Bernita Bush & Ambasstown Jazzband
Update Required To play the media you will need to either update your browser to a recent version or update your Flash plugin.