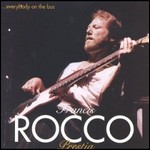 Francis «Rocco» Prestia (born March 7, 1951) is an American musician, the bassist of the legendary funk band Tower of Power and one of the most important figures in electric bass' history.

Born in Sonora, California, Prestia started playing electric guitar as an adolescent. When he auditioned for Emilio Castillo's band Tower of Power, Castillo persuaded him to switch to electric bass.

Prestia remembers an "immediate and incendiary" connection with the band's drummer, David Garibaldi, with whom he would establish one of the most original and influential rhythm sections of all time. The drummer's fast, nervous style blended perfectly with the bassist's dry, percussive approach. The resultant combination, along with the band's powerful horn section, defined the band's distinctive sound.

Prestia worked with the band for the next three decades, then he became seriously ill in 2001. His fans and friends created a foundation in order to help pay the artist's medical costs. In 2002 Prestia underwent successful liver transplant surgery and since then he has gradually resumed his professional activity.

Francis "Rocco" Prestia has built one of the pillars which support the modern electric bass. He is a master of fingerstyle funk, a technique that he interprets in a very personal way. Prestia lightly mutes the strings with his left hand to get a percussive sound with the pitch remaining clear and accurate. That characteristic sound, in combination with a highly inventive melodic approach to bass lines makes Prestia's sound unmistakable.

With James Jamerson, Stanley Clarke, Anthony Jackson and Alphonso Johnson, "Rocco" Prestia belongs to the generation of bassists that, a few years before, made possible the great revolution on the electric bass that Jaco Pastorius entailed with his innovations on mid-1970s. The influence of Prestia over the great bassist, that Jaco recognized openly, is clear on classic Tower of Power tracks as the 1973 hit "What is Hip". On the other hand, Rocco cites James Jamerson and the different musicians who worked for James Brown (particularly Bootsy Collins) as his main influences.[1]

Prestia's primary instruments are his Fender Precision basses (a purple transparent American Deluxe and a natural ash-bodied short-lived signature model with a reverse split pickup and a 2-band EQ). In recent years he has maintained an association with the Conklin[disambiguation needed] company that provided him a custom built four-string instrument, one of the few in the company's catalog.

Discography with Tower of Power

This article uses material from the article Rocco Prestia from the free encyclopedia Wikipedia and it is licensed under the GNU Free Documentation License.

If You Ain't Been To Houston Philipp Fankhauser
Update Required To play the media you will need to either update your browser to a recent version or update your Flash plugin.