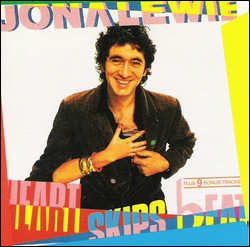 Jona Lewie (born John Lewis, 14 March 1947 in Southampton, England) is an English singer-songwriter and multi-instrumentalist, best known for his 1980 UK hits "You'll Always Find Me in the Kitchen at Parties" and "Stop the Cavalry".

Jona Lewie joined his first group, the Johnston City Jazz Band, while still at school in 1963, and by 1968 had become a blues and boogie singer and piano player. In 1969, as a singer/songwriter, he contributed compositions and recordings for the compilation album I Asked For Water She Gave Me ... Gasoline on the Liberty/UA label. Other compositions in 1969 were for the album These Blues is Meant to Be Barrel Housed on the Yazoo/Blue Goose label in New York, still as a solo artist known as John Lewis.

In 1969 he became acquainted with the blues band Brett Marvin and the Thunderbolts, which was holding a residency at Londons Studio 51 club, joining as a vocalist and piano player. Brett Marvin signed to the Robert Stigwood Agency in 1970, and Jona Lewie, as part of the band, appeared on television in Sweden, Denmark, Belgium and the Netherlands, and in 1971 performed in a concert with Son House and supported Eric Clapton's Derek and the Dominoes on a UK tour. Lewie stayed with Brett Marvin until 1973, its mainstream hit single being "Seaside Shuffle", another Lewie composition, released under the one-off nom de disque Terry Dactyl and The Dinosaurs. The record did little on first release in 1971, but in 1972 a re-release reached number 2 in the UK Singles Chart,[1] aided by a marketing and distribution agreement for the song between Terry Dactyls record label, Sonet, and Jonathan King's UK label. A subsequent Lewie composed Terry Dactyl track "On a Saturday Night" reached 42 in the UK in 1973 and a cover version was a hit in Spain. "She Left; I Died" was the third and last Lewie composition he recorded for the Terry Dactyl catalogue just before leaving the band.

After the demise of Terry Dactyl, Lewie had initially looked likely to remain a part of a one-hit wonder group. However, he continued to write and make records now as a solo artist for Sonet between 1974 to 1976 including the titles "Piggy Back Sue" and "The Swan" which were both played by BBC Radio 1 disc jockey Charlie Gillett, who would regularly feature them on his "Honky Tonk" radio show. At this time he also helped form the short-lived, and potentially promising band called The Jive Bombers that played the established London gig circuit of the time at such venues as the Hope and Anchor, the Greyhound, the 100 club and the Marquee. The band stayed together for just six months and was not able to realise any potential recording career despite Ted Carol's offer of a record deal on his own label Chiswick Records. The band members included Iain 'Thumper' Thompson, who went on to help form the successful chart act Darts, the guitarist Martin Stone and the drummer Wilgar Campbell. This period, however, did culminate in some further recordings that achieved chart activity for Lewie in Europe as a solo recording artist with two of his Sonet singles 'Cherry Ring' and 'Come Away' leading to solo TV appearances in Central and Northern Europe.

Despite Lewie's continuing development as a songwriter and recording artist, he did not forget his early roots as a blues and boogie-woogie pianist evidenced by Lewie providing blues piano for albums by American blues singer/guitarists Arthur 'Big Boy' Crudup ('Roebuck Man' released on United Artists) and Juke Boy Bonner ('Things Ain't Right' on Liberty) in the early 70s. Also he would accept Bob Hall's invitations to the boogie-woogie piano parties that Bob Hall would threw in the seventies before he moved away from London. Renowned English boogie-woogie players of the period would often drop in and chew the boogie cud, comparing notes and discussing styles. At one such party, Ian Stewart, known as the sixth Rolling Stone because of his closeness to the group the Rolling Stones, duetted with Bob Hall along with Lewie himself, all three in emulation of the master American triumvirate popular in the 1940s: Albert Ammons, Meade Lux Lewis and Pete Johnson.

A most significant step in the continuing rise of Lewie's career was when he was signed to Stiff Records in 1977. In 1980, following appearances on the Stiff package tours, he had a solo hit with the humorous synthpop number, "You'll Always Find Me in the Kitchen at Parties" co-written with fellow Brett Marvin member Keef Trouble, which made the British Top 20.[2] His next single, "Big Shot Momentarily", was a hit in Germany but not in the UK. By the end of 1980 he was back in the British charts with what became his biggest UK hit, "Stop the Cavalry".[2] His subsequent 1981 release, "Louise (We Get It Right)" reached no. 2 in Australia, and achieved chart success in other world territories. His recordings of his songs for Stiff Records : "Vous Et Moi" and "The Seed That Always Died", both charted in France. Both 'Kitchen At Parties' and 'Stop The Cavalry' had also been hits in Germany at the times of their original releases in 1980 and 1981 respectively, and remained popular in Germany. In 2010 and 2011 both tracks achieved prominent positions in an all time German chart that appeared in a high ratings TV show: not only in the Electronica category (for 'You Will Always Find Me In The Kitchen At Parties') but also in the Pop category (for 'Stop The Cavalry'). Lewie performed in both the Electronica and Pop Ultimate Chart Programmes known as 'The Ultimate Chart Show' which was broadcast to the nation from Cologne in 2010 and 2011 . He also talked on the 'chat' part of the show with the aid of a German interpreter.

During the 1990s, Lewie appeared with solo public performances on a 60 day UK tour as guest of The Blues Band, playing venues such as theatres and civic centres, while occasionally playing one-off gigs such as that at the Hackney Empire, London and taking part in occasional radio and television broadcasts. In December 2005, he appeared in Channel 4's Bring Back...The Christmas Number One, along with David Essex and Slade. They only fronted, but did not play on, the studio recording session of "I'm Going Home". It failed to secure a recording contract. It was written by ex-Mud star Rob Davis, who also appeared on the show. In 2009, Lewie performed two songs at the London Ukulele Festival. The next year Lewie joined Captain Sensible and The Glitter Band on their British tour, but he was able to do only three performances due to prior commitments.

This article uses material from the article Jona Lewie from the free encyclopedia Wikipedia and it is licensed under the GNU Free Documentation License.

I'll Let You Know Houston Person
Update Required To play the media you will need to either update your browser to a recent version or update your Flash plugin.