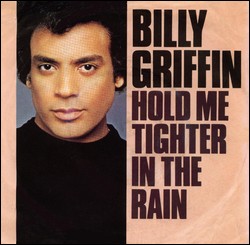 William L. "Billy" Griffin (born in Baltimore, Maryland)[1] is an American singer and songwriter. He is best known for replacing Smokey Robinson as lead singer of The Miracles in 1972.[1]

Griffin was born and raised in West Baltimore, Maryland, where he lived on Mount Holly Street. He attended Garrison Junior High School and Forest Park High School. He, like his brother Donald Griffin, (who later replaced Marv Tarplin in the Miracles), is a guitarist,as well as a singer, and sang with a local Baltimore group called The Last Dynasty. Damon Harris, who later went on to fame as a member of The Temptations, was a high school friend and group member in another local group, the Tempos. Griffin idolized Miracles lead singer Smokey Robinson, while Harris idolized Temptation Eddie Kendricks. Both of them wound up as replacements for their idols in their respective groups.

Griffin and three friends formed the group Last Dynasty[2] and won a talent program on NBC Television. "It was like a pre-American Idol thing. My group won. We sang `Friendship Train' by Gladys Knight and the Pips," Griffin said. The Last Dynasty won a record deal from RCA as first prize, but never took it. The next week, Griffin was in Detroit, auditioning for Berry Gordy and the Motown executives. He was the 60th guy they brought in to audition to replace Smokey Robinson - and Griffin got the job.

During The Miracles' nationwide 1972 Farewell Tour with Smokey Robinson, Griffin was introduced by Robinson as his replacement in The Miracles as lead singer. After a year of woodshedding with Motown's famous Artist Development Dept., Griffin released his first single with The Miracles, "What Is A Heart Good For", from their first post-Robinson album, Renaissance in 1973. Griffin sang this song on his first national television appearance as a Miracle with the remaining group members of The Miracles, Bobby Rogers, Ronnie White, and Pete Moore on another NBC music program, The Midnight Special, in 1973, hosted by Robinson. The single was withdrawn and replaced with a ballad, "Don't Let It End (Till You Let It Begin)", which was a mild hit. After a second single, "Give Me Just Another Day", was released later that year, The Miracles released "Do It Baby" in 1974, which peaked at #4 on the Billboard R&B charts and became the group's first bona-fide hit with Griffin.

Like Robinson before him, Griffin co-wrote many of the Miracles' songs, in addition to singing lead. Griffin and original Miracles member Pete Moore wrote all of the Miracles' 1975 platinum selling[3] album, City of Angels. During his tenure with the group, they recorded three hits: "Do It Baby" in 1974, and the Miracles' most successful single, the number-one hit "Love Machine", in 1975 which sold 4.5 million records worldwide.[4] Griffin also sung lead on "Don't Cha Love It", a Top 10 R&B #4 single.

The Miracles left Motown in 1976, signing with Columbia Records. After two albums for Columbia, Griffin and Moore decided to retire from performing and focus on songwriting. In 1982, Griffin released his first solo album, Be With Me, which yielded the UK Singles Chart Top 20 hit "Hold Me Tighter in the Rain".[5] The following year, Respect yielded the club hit, "Serious" which peaked at #64 in the UK chart.[5] After a third album with Leon Ware, Griffin switched record label to Atlantic Records but despite completing an album, only one single "Believe It or Not" was released there before he was left without a recording contract.

In 1989, Griffin joined UK record producer Ian Levine's Motown-reunion project Motorcity Records, and was the first to release a single on the label, "First in Line". Griiffin also fronted a Miracles reunion with a new recording of "Love Machine". Griffin became a writer and backing vocals arranger for several of the other artists, and recordes a large number of tracks himself, but his album Technicolour was never released and the label collapsed in 1992. Most of his Motorcity recordings were released on the 1996 compilation Best Of Billy Griffin.

Levine and Griffin also landed a couple of hit singles for the UK soul band The Pasadenas and co-produced Take That's debut album, which including the hit singles "Could It Be Magic" (UK #3) and "I Found Heaven" (UK #15). They also worked with Levine's boy band, Bad Boys Inc.

Griffin has written songs and sung backing vocals for Aretha Franklin, The O'Jays, Ronald Isley, Freda Payne, Edwin Starr, Evelyn Champagne King, Herb Alpert, Martine McCutcheon, The Emotions and many others. In 2006, Griffin released his latest solo album, Like Water. Griffin can be seen performing "Do It Baby" and "Love Machine" with The Miracles on the Motown/Universal DVD release: Smokey Robinson & The Miracles : The Definitive Performances 1963-1987

and donned the pop producer's cap to give The "Pasadenas" (that Soul Quintet from England) their Top of the Pop's, number one hit with "I'm Doing Fine Now." http://www.youtube.com/watch?v=V0RSjUqduZU Lest we forget the Billy Griffin productions of " I Found Heaven","Could It Be Magic" and "A Million Love Songs"........ that spearheaded the break-out career of the quentisential British Boy band "Take That."

Who according to the BBC, is second only to the "Beatles" as the biggest British Music Export ever!! As you well know "Take That" would eventually spin-off the solo stylings of the flamboyant Super-Star, Robbie Williams.

Griffin was honored with the other Miracles when the group received a Star on the Hollywood Walk Of Fame on March 20, 2009.[7]

This article uses material from the article Billy Griffin from the free encyclopedia Wikipedia and it is licensed under the GNU Free Documentation License.

Permanentes Dirk
Update Required To play the media you will need to either update your browser to a recent version or update your Flash plugin.