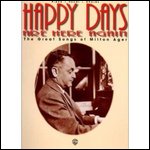 Ager was born to a Jewish family[1] in Chicago, Illinois, the sixth of nine children. Leaving school with only three years of formal high-school education, he taught himself to play the piano and embarked on a career as a musician. After spending time as an accompanist to silent movies, he moved to New York City to write music. During World War I he served as a morale officer.

Ager also was a music publisher in partnership with his frequent musical collaborator, lyricist Jack Yellen. He moved to Hollywood where he made a living writing songs for film. On his death, Milton Ager was interred in the Westwood Village Memorial Park Cemetery in Los Angeles.

Ager was inducted into the Songwriters Hall of Fame in 1979.

In 2007, a revue of Ager's music called Vampin' Lady opened in New Hope, Pennsylvania, performed by singer Joyce Moody under the direction of Earl Wentz and transferred to New York City as part of the American Composer Series.

Among the best known Milton Ager songs are:

Works for Broadway include:

This article uses material from the article Milton Ager from the free encyclopedia Wikipedia and it is licensed under the GNU Free Documentation License.