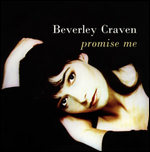 Beverley Craven (born 28 July 1963) is a British singer-songwriter best known for her 1991 UK Top 5 hit single "Promise Me". Her most recent album, Change of Heart, was released in 2014. She has sold over four million records in her career.

Although British, Craven was born in Colombo, Ceylon (now Sri Lanka) in July 1963 while her father was working there for Kodak.

Two years later the family returned to Hertfordshire, Craven began taking piano lessons at the age of seven encouraged by her mother who was a classical violinist. Upon leaving school, she attended art college while performing with various bands in London pubs and writing songs. She was also an accomplished swimmer during her teens and competed in several local and national swimming competitions around the UK.

Craven did not buy her first pop record until she was 15 when she started buying records by singer-songwriters such as Elton John, Judi Tzuke, Stevie Wonder and, in particular, Kate Bush, all of whom influenced her music.

At 18, Craven left school and home and worked in a number of odd jobs. Having failed to find any sympathetic musicians with whom to play, at the age of 22 she decided to strike out on her own as a piano-playing singer and songwriter. Following a brief stint touring with soul singer Bobby Womack, who tried to sign her to his record label, she recorded her first set of demos and attracted the attention of Go West’s manager, John Glover. He quickly set about securing her a major music publishing deal with Warner Brothers and a development contract with Epic records followed.

In November 1988 she was sent to Los Angeles to work with some established songwriters and to ‘learn her craft’ playing in bars and restaurants. The experience was "unproductive" she confesses, preferring even now to write alone. Soon afterwards, again in Los Angeles, she made her first attempt to record her debut album with Stewart Levine of Simply Red fame. However she felt the professionalism of the recordings failed to capture the naivete of her work and was relieved when Epic agreed. She went on to record with Paul Samwell-Smith, whose other production credits included Cat Stevens, Carly Simon and All About Eve.

The album, Beverley Craven, was eventually released in July 1990. Although it initially failed to attract attention in the United Kingdom, it found acceptance in Europe.

It was not until April 1991 that she found success in her homeland. A re-released "Promise Me" was heavily promoted and eventually peaked at No. 3 in the UK singles chart, becoming her biggest hit. This success helped her debut album also chart at No. 3 in the UK, staying charted for over a year in the UK and eventually going double platinum in that country. The album sold in excess of 1.2 million copies worldwide. Other singles released to promote the album, including "Holding On" and "Woman To Woman" were less successful, but helped maintain the momentum.

In 1992 she released a videotape, titled Memories, recorded live at the Birmingham Symphony Hall.

In February 1992, Craven performed at the Brit Awards show (following her nomination in three categories), winning the Best British Newcomer Award. She was eight months pregnant when she sang at the Brits and she gave birth to her first child, Mollie, less than a month later.

Craven spent much of 1992 enjoying motherhood and recording her second album. Love Scenes, again produced by Paul Samwell-Smith, was eventually released in September 1993. It peaked at #4 on the United Kingdom charts, but overall was much less successful than her debut, spending only 13 weeks on the charts. It spawned three singles, "Love Scenes", "Mollie's Song" (written for her daughter), and a cover of ABBA's "The Winner Takes It All". These singles only became minor hits, with only the title track reaching the UK top 40.

In 1993 she embarked on a twelve-date concert tour, and the following Christmas played a sell-out show at the Royal Albert Hall.

Craven took a five-year hiatus after giving birth to two more daughters, and it was not until 1999 that she released her third album, Mixed Emotions. Craven recorded the album in her home studio and for the first time produced the record herself. The album peaked at #46 in the UK, spending two weeks on the charts. The lead single "I Miss You" was only released as a promo single as the label refused to release it commercially. After promotion for this album ended, Craven left Epic Records and retired from the music industry to take care of her daughters.

Also in 1999, Craven contributed lead vocals on the song "The Very Last Time", included on the album The Time Machine, by Alan Parsons.

In 2004 The Very Best of Beverley Craven compilation album was released, and Craven embarked on a comeback to promote the record, making a handful of live concert appearances, but shortly after she was diagnosed with breast cancer. Following treatment she was finally given the all-clear, and returned to the stage in 2006, doing more tours in subsequent years.

In March 2009, Craven released her first album in ten years, Close To Home, fully written and produced by herself. She released it on her own record label and sold it initially through her website and at concerts, although later in the year she made it available for purchase on online retailers and on digital outlets. The song "Rainbows" was released as a digital download single and she filmed a videoclip of it.

Craven released a live DVD, titled Live in Concert, in August 2010, as well as a songbook later in the year featuring songs from her four albums.

Craven published her autobiography, Truth Be Told, in 2012, selling it exclusively on her website.

Craven's fifth studio album, Change of Heart released on 1 September 2014, followed by a tour through the UK in the Autumn.

In February 2018, the Woman to Woman tour was announced. Craven will tour with fellow British singer-songwriters Judie Tzuke and Julia Fordham, starting in November 2018. A joint single by the three artists, "Safe", was released in March.

After meeting backstage at a Tears for Fears concert in 1991, Craven married singer-songwriter Colin Campsie. The couple have three daughters, Mollie, Brenna and Constance (Connie), but separated in 2010 and divorced in 2011.[1]

This article uses material from the article Beverley Craven from the free encyclopedia Wikipedia and it is licensed under the GNU Free Documentation License.

Jack's Blues Henri Chaix Trio
Update Required To play the media you will need to either update your browser to a recent version or update your Flash plugin.