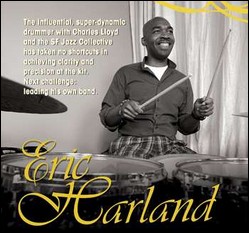 In addition to leading his own group, Harland is a member of Charles Lloyd's Quartet, Dave Holland's Prism, James Farm with Joshua Redman, and Taylor Eigsti's Trio.

He has also been a member of McCoy Tyner's Quartet, Kurt Rosenwinkel's Standards Trio, Aaron Goldberg's Trio, Julian Lage's Trio, Chris Potter's Trio, and Terence Blanchard's Quintet, among other groups.[1][2] He was a member of the SFJAZZ Collective from 2005 to 2012.

Harland began his professional career in 1993 playing locally in Houston, Texas, as he finished high school at the High School for the Performing and Visual Arts, where many notable performers have studied. Harland won first chair in 1992–93 with the Regional and All State Texas Jazz Band. He received a special Citation for Outstanding Musicianship in 1994 from the International Association for Jazz Education. During a workshop in high school, Wynton Marsalis encouraged Harland to study in New York City.

After graduation Harland attended the Manhattan School of Music with a full scholarship in their music program. After music school he went on to study Theology at Houston Baptist University (College of Biblical Studies) and was subsequently ordained as a Minister.

Harland has been featured on over 80 recordings with various artists. Among these recordings, Let's Get Lost and Wandering Moon (Terence Blanchard), Back East (Joshua Redman), and Land of Giants (McCoy Tyner) were nominated for Grammy Awards. With Blanchard and Spike Lee, Harland has performed in 18 motion picture movie scores, including The Caveman's Valentine, Original Sin, People I Know, and Dark Blue.

In DownBeat's 65th Annual Readers Poll, Harland was included on the short list of world's most recognized drummers along with Elvin Jones and Roy Haynes. He also won the 2008 and 2009 Critics Polls for Rising Star on the Drums. Harland was featured in the September 2002 and November 2009 issues of Modern Drummer.

With the Monterey Quartet

With the SFJAZZ Collective

This article uses material from the article Eric Harland from the free encyclopedia Wikipedia and it is licensed under the GNU Free Documentation License.

I'm Old Fashioned Joris Dudli Blue Train Sextet
Update Required To play the media you will need to either update your browser to a recent version or update your Flash plugin.