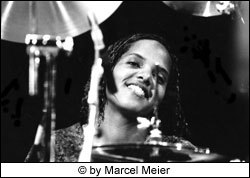 Terri Lyne Carrington (born August 4, 1965) is a jazz drummer, composer, singer, record producer and entrepreneur. She has played with Dizzy Gillespie, Stan Getz, Clark Terry, Herbie Hancock, Wayne Shorter, Joe Sample, Al Jarreau, Yellowjackets, and many others. She toured with each of Hancock's musical configurations (from electric to acoustic) between 1997 and 2007.

In 2007 she was appointed professor at her alma mater, Berklee College of Music, where she received an honorary doctorate in 2003. She has won three Grammy Awards.

Carrington was born on August 4, 1965[1] in Medford, Massachusetts, United States, into a musical family: her mother played piano as a hobby and her father was a saxophonist and president of the Boston Jazz Society.[2][3] At the age of seven, Carrington was given a set of drums that had belonged to her grandfather, Matt Carrington, who had played with Fats Waller and Chu Berry. After studying privately for three years, she gave her first major performance at the Wichita Jazz Festival with Clark Terry. At the age of 11 she received a full scholarship to Berklee College of Music. When she was 12 years old she was profiled on the PBS kids' biography program Rebop.

At Berklee College of Music she played with musicians such as Kevin Eubanks, Donald Harrison, and Greg Osby. She also studied under drum instructor Alan Dawson and made a private recording entitled TLC and Friends, with Kenny Barron, Buster Williams, George Coleman and her father.

Throughout high school she traveled across the country doing clinics at various schools and colleges.

In 1983, encouraged by her mentor, Jack DeJohnette, Carrington moved to New York, where she worked with Stan Getz, James Moody, Lester Bowie, Pharoah Sanders, Cassandra Wilson, David Sanborn, and others.

In the late 1980s Carrington relocated to Los Angeles, where she gained recognition on late-night TV as the house drummer for The Arsenio Hall Show, then again in the late 1990s as the drummer on the late night TV show VIBE, hosted by Sinbad. In 1996 she collaborated with Peabo Bryson on "Always Reach for Your Dreams", a song commissioned for the 1996 Olympic Games.

As an entrepreneur, Carrington is a partner in Hebert-Carrington Media (HCM). Founded in 2007 and based in Atlanta, Boston, New Jersey, Washington, DC, Chicago, and Rio de Janeiro, Brazil,[8] HCM's origins can be traced to the long-term relationships with company co-founder Robert A. Hebert, high-tech entrepreneurs Frank White, Jr. and Dr. Bernard Yaged, and media and communications advisor Don Lucoff of DL Media.

This article uses material from the article Terri Lyne Carrington from the free encyclopedia Wikipedia and it is licensed under the GNU Free Documentation License.