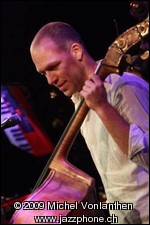 Avishai grew up in a musical family at Motza and Beit Zayit near Jerusalem until the age of six, when his family moved to Shoeva, western Israel. He began playing the piano at 9 years old, but changed to the bass guitar at the age of 14, inspired by legendary bassist Jaco Pastorius.[1] Later, after playing in an Army band for two years, he began studying upright bass with maestro Michael Klinghoffer. Two years later he moved to New York City, and got in contact with other jazz players. At the beginning of his stay there he had to struggle, working in jobs like construction. According to him his first year there was the most difficult year of his life, having to play bass in the streets, subways and parks. He studied music at Mannes College The New School for Music, and after playing Latin jazz in a few bands in his student years, Cohen was approached by pianist Danilo Pérez to join his trio.[2]

After a long period of performing in small clubs, Cohen got a phone call from the jazz pianist Chick Corea and was given a record contract. In 1996, he became a founding member of Corea's sextet Origin, and his first four albums as a leader were subsequently released under Corea's Stretch label.[2] Cohen performed in Corea's bands until as late as 2003, when he left the Chick Corea New Trio and started his own record label; he currently performs with his own group, the Avishai Cohen Trio (with New Jersey's Mark Guiliana on drums and Israel's Shai Maestro on the piano). His later albums have been released by this formation with extended lineup including wind instruments.

Aside from Corea, Cohen has accompanied, recorded or performed with several noted jazz figures such as Bobby McFerrin, Roy Hargrove, Herbie Hancock, Kurt Rosenwinkel, Nnenna Freelon and Paquito D'Rivera.[2] Other collaborators include Claudia Acuña (Wind from the South, 2000), Alicia Keys (studio recording) and the London and Israel Philharmonic Orchestras (concert performances).[2] Cohen has been cited as "undoubtedly the most successful" of Israel's jazz exports by The Jerusalem Post,[3] a "jazz visionary of global proportions" by Down Beat, one of the 100 Most Influential Bass Players of the 20th Century by Bass Player magazine,[2] and "a great composer" and "a genius musician" by Chick Corea himself.[4]

In 2002, Cohen founded his own record label, Razdaz Recordz, and on September 9 of 2003, released his label's debut album, Lyla. "I've always been interested in several genres of music, including jazz, rock, pop, Latin and funk," says Cohen. "I'm always packed with ideas. I decided to start my own label because I'm involved in so many different projects."[5] (Avishai Cohen, 2003) At the time of 2012, the label has produced 12 albums, five of which are of Cohen's. Other artists associated with the label include Sam Barsh, Saxophonist Jimmy Green flutist Ilan Salem, and guitarist Amos Hoffman. Also produced by Razdaz are the works of some of Cohen's associates such as drummer Mark Guiliana,who performed with Cohen in two of his albums. Razdaz produced an album for Guiliana'a band HEERNT in 2006. Razdaz also produced 'Lady of The Forest, the first album of the singer Karen Malka in 2010, who had been touring with Cohen for three years prior. The most recent production of the label is Ilan Salem's album, 'Wild', which is actually Ilan's third album, though it is his first under Razdaz.

Lyla is the first album released by Cohen's Razdaz Recordz. The album was lauded for its genre breaking diversity. Cohen reflects on his work, "Lyla reflects much of who I am as an artist. The International Vamp Band has been touring for two years and I wanted to document that. I also started a rock band Gadu with Israeli drummer named Mike Starr dubbed by Drummer magazine as one of the most aggressive drummers in Jazz and some young musicians who are graduates of William Paterson College. It's creating a buzz in New York, I have been exploring a lot of new territory. I've also been working on pop tunes with a female vocalist named Lola. And, of course, to show the whole picture on the CD, I wanted to acknowledge my relationship to Chick. I've been associated with him for six years and have played hundreds of shows in his bands, so we're very connected."[6]

This article uses material from the article Avishai Cohen (bassist) from the free encyclopedia Wikipedia and it is licensed under the GNU Free Documentation License.

As Far As The Eye Can See David Wildi Guitar Poetry
Update Required To play the media you will need to either update your browser to a recent version or update your Flash plugin.