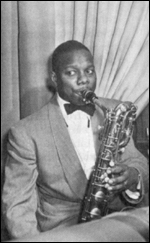 Harry Howell Carney (April 1, 1910 – October 8, 1974) was an American jazz musician whose virtuosity on the baritone saxophone influenced generations of subsequent players. He also performed on clarinet and bass clarinet, as well as alto saxophone in the early years of his career. Mainly known for his 45-year tenure in Duke Ellington's Orchestra, Carney's strong, steady saxophone often served as the anchor of Duke's music.

Harry Howell Carney was born in 1910 in Boston, Massachusetts. He began by playing the piano at age six, moved to the clarinet at 13, and added the alto saxophone a year later. He grew up next door to future Ellington bandmate Johnny Hodges, four years his elder, who was an early influence on his music. His other main influences included clarinetists Buster Bailey and Don Murray and saxophonists Coleman Hawkins and Adrian Rollini.[1]

After playing a variety of gigs in New York City at the age of 17, Carney joined Ellington in Boston in 1927. He initially played alto and soprano saxes, doubling on clarinet while Otto Hardwick handled the baritone parts.[2] Carney initially vied with clarinetist Rudy Jackson for the hot clarinet solos and with Hardwick for alto and soprano solos. An example of this is on Blue Bubbles, a song with Carney on alto and soprano, and Hardwick on baritone. As Hardwick didn't stand out on baritone sax as much as his other horns, Carney saw an opportunity and immediately purchased a baritone sax. His progress was quick, and soon began being featured on the instrument.

When Otto Hardwick left Ellington in 1928 to go to Europe, Carney took over the lead alto parts with Johnny Hodges taking over the main alto and soprano parts. Harry Carney took a rare solo on tenor sax (borrowing Barney Bigard's horn) on the Ellington song Hot Feet. He also occasionally took a solo on clarinet, despite Bigard being the featured clarinetist with Ellington from 1928-1942. Examples include Bugle Call Rag, Rexatious (with Rex Stewart), the 1932 versions of Creole Love Call (his is the first clarinet solo), I Don't Know What Kind of Blues I've Got, It's Like Reaching For The Moon (with Teddy Wilson and Billie Holiday) and so forth. Carney performed a rare alto clarinet solo on Duke's Saddest Tale, and borrowed a bass clarinet for Blue Light in 1938.

Carney didn't fully take up bass clarinet until 1943, becoming one of the pioneers of the instrument. His alto saxophone work was reduced back to section work after 1932 when Otto Hardwick returned to the band full-time as lead alto. He does have a few rare features on a 1940 session with Rex Stewart playing alto on Linger Awhile and My Sunday Gal. Although still seen doubling alto on a 1943 musical short "Symphony in Swing", he soon stopped playing alto shortly thereafter. This was lamented by Mercer Ellington in his autobiography as his playing alto sax brought an additional tonal color to the sax section.

Carney focused mainly on the baritone saxophone for the remainder of his career, doubling bass clarinet, and less frequently clarinet. He temporarily played some established clarinet solos in the 1940s such as on Mood Indigo, Creole Love Call, Sugar Hill Penthouse and The Mooche, but this was taken over by Russell Procope's more New Orleans-ish styled clarinet later on. He did retain his sole set clarinet solo on Rockin' In Rhythm.

Carney was the longest serving player in Duke Ellington's orchestra. On occasions when Ellington was absent or wished to make a stage entrance after the band had begun playing the first piece of a performance, Carney would serve as the band's conductor. Ellington and Carney were close friends. The majority of their careers they rode together in Carney's car to concerts, allowing Ellington to come up with new ideas. Fictionalized accounts of these road trips are documented in Geoff Dyer's But Beautiful (1991).

Ellington wrote many showpiece features for Carney throughout their time together, such as "Frustration" (c. 1944-45). This was typical of Ellington's ability to exploit the voices of his most treasured soloists by creating works that were tailored specifically to the individual rather than being for a generic baritone saxophonist. In addition, Ellington would sometimes feature Carney's robust renditions of the melodies of such hits as "Sophisticated Lady" and "In a Mellow Tone". In 1973 Ellington built the Third Sacred Concert around Carney's baritone saxophone.[3]

As the Ellington orchestra increased its reed section to five players Carney's voice was heard a little less as a soloist than it had been in the 1930s. From late 1939 onwards a regular tenor saxophonist was added, the most important being the outstanding Ben Webster and later Paul Gonsalves. It was also in the early 1940s that Carney ceased using the alto saxophone and Johnny Hodges abandoned the soprano saxophone. Carney's clarinet continued to be deployed in the well-known composition "Rockin' in Rhythm", for which he is also credited as a co-composer. This was one of the 'work–horses' of the Ellington orchestra that remained in the band books throughout its life on the road. After Ellington's 1974 death, Carney said: "This is the worst day of my life. Without Duke I have nothing to live for." Four months later, Carney also died.[4]

While not the first baritone saxophonist in jazz, Carney broke through to greatness, producing a sound that influenced several generations of musicians.

Throughout his career he played saxophones manufactured by C.G. Conn, and like other jazz musicians was known to offer endorsements of his preferred brand. Photographic evidence suggests that the mouthpieces he used were predominantly those of the Woodwind Company of New York. (His preferred model may have been that company's 'Sparkle-Aire' 5.) The combination of such a large-chambered mouthpiece and the Conn brand of baritone saxophone was certainly a factor in the production of his enormous, rich tone.

He was an early jazz proponent of circular breathing. He was also Hamiet Bluiett's favorite baritone player because he "never saw anybody else stop time"[1] in reference to a concert Bluiett attended where Carney held a note during which all else went silent.

Carney made a few recordings as a leader, and also recorded with Lionel Hampton.

This article uses material from the article Harry Carney from the free encyclopedia Wikipedia and it is licensed under the GNU Free Documentation License.

Gone With The Wind Wes Montgomery
Update Required To play the media you will need to either update your browser to a recent version or update your Flash plugin.