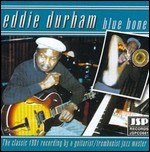 Eddie Durham (19 August 1906 – 6 March 1987) was an African American musician who pioneered the use of the electric guitar in jazz. He was a guitarist, trombonist, composer, and arranger for the orchestras of Benny Moten, Jimmie Lunceford, and Count Basie. With Edgar Battle he composed "Topsy", which was recorded by Count Basie and became a hit for Benny Goodman. In 1938 Durham co-wrote "I Don't Want to Set the World on Fire", with Bennie Benjamin, Sol Marcus and Eddie Seiler.

Pioneer on the electric guitar

From 1929, Durham started experimenting to enhance the sound of his guitar using resonators and megaphones. In 1935 he was the first to record an electrically amplified guitar[1] with Jimmie Lunceford in 'Hittin' The Bottle' that was recorded in New York for the Decca label.[2]

This article uses material from the article Eddie Durham from the free encyclopedia Wikipedia and it is licensed under the GNU Free Documentation License.

Brotherhood Of Man Super Trio
Update Required To play the media you will need to either update your browser to a recent version or update your Flash plugin.