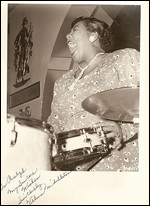 Middleton was born in Holdenville, Oklahoma, and later moved with her parents to St. Louis, Missouri. She is best known for having sung with Louis Armstrong's big bands and small groups. She performed with Armstrong from 1942 until her death in 1961.

Middleton spent most of her career as Louis Armstrong's singer. She was originally a dancer and, although overweight, she often did splits on stage, even during her Armstrong years. Middleton had an average but pleasing and good-humored voice. After freelancing, including a visit to South America in 1938 with Connie McLean's Orchestra and performing as a solo act, she joined Louis Armstrong's big band in 1942, appearing on some Soundies with Satchmo.

After Armstrong broke up the orchestra in 1947, Middleton joined his All-Stars. She was often used for comic relief, such as for duets with Satchmo on "That's My Desire" and "Baby, It's Cold Outside", and she did occasional features. Few jazz critics thought highly of her singing, but Armstrong considered her part of his family, and she was a constant part of his show.

She recorded eight selections as a leader for the Dootone label, in 1948 and 1951.

While touring with Armstrong in Sierre Leone, she had a stroke or heart attack on January 25, 1961 and died on February 10, 1961 in the Hill Station Hospital in Freetown, Sierra Leone.

This article uses material from the article Velma Middleton from the free encyclopedia Wikipedia and it is licensed under the GNU Free Documentation License.

Like Someone In Love Hank Jones
Update Required To play the media you will need to either update your browser to a recent version or update your Flash plugin.