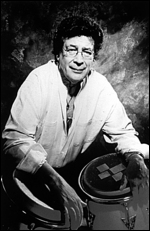 Barretto (his real name,"Barreto", was misspelled on his birth certificate) was born in New York City. His parents moved to New York from Puerto Rico in the early 1920s, looking for a better life. He was raised in Spanish Harlem and at a young age was influenced by his mother's love of music and by the jazz of Duke Ellington and Count Basie.[1][2][3]

In 1946, when Barretto was 17 years old, he joined the Army. While stationed in Germany, he met Belgian vibraphonist Fats Sadi. However, it was when he heard Dizzy Gillespie's "Manteca" with Gil Fuller and Chano Pozo that he realized his calling.[1][2][3]

In 1949, when Barretto returned home from military service, he started to visit clubs and participated in jam sessions, where he perfected his conga playing. On one occasion Charlie Parker heard Barretto play and invited him to play in his band. Later, he was asked to play for José Curbelo and Tito Puente, for whom he played for four years. Barretto developed a unique style of playing the conga and soon he was sought by other jazz band leaders. Latin percussionists started to appear in jazz groups with frequency as a consequence of Barretto's musical influence.[1][2][3]

In 1960, Barretto was a house musician for the Prestige, Blue Note, and Riverside labels. He also recorded on Columbia Records with Jazz flautist Herbie Mann. New York had become the center of Latin music in the United States and a musical genre called "pachanga" was the Latin music craze of the time.

In 1961, Barretto recorded his first hit, "El Watusi." He was quite successful with the song and the genre, to the point of being typecast (something that he disliked).[1][2][3]

After recording a number of albums for the United Artists label, Barretto joined the Fania record label in 1967, and his first recording for the new label was the 1968 album Acid, an experiment joining rhythm and blues with Latin music. During this period, Adalberto Santiago was the band's lead vocalist. In 1972 Barretto's Que viva la musica was released. "Cocinando," a track from the album, opened the soundtrack of the Fania All Stars film Our Latin Thing in which Barretto had a role.

In 1973, Barretto recorded the album Indestructible, in which he played "La Familia", a song written by José Curbelo in 1953 and recorded by the sonero Carlos Argentino with the Cuban band Sonora Matancera; Tito Allen joined as new vocalist. After a number of successful albums, and just as his Afro-Cuban band had attained a remarkable following, most of its members left it to form Típica 73, a multinational "salsa" conglomerate. This left Barretto depressed and disappointed with salsa; he then redirected his efforts to jazz, while remaining as musical director of the Fania All Stars. In 1975 he released Barretto, also referred to as the Guarare album, with new vocalists Ruben Blades and Tito Gomez.[1][2][3]

Barretto played the conga in recording sessions for the Rolling Stones and the Bee Gees. In 1975, he was nominated for a Grammy Award for the song "Barretto". From 1976 to 1978, Barretto recorded three records for Atlantic Records, and was nominated for a Grammy for Barretto Live...Tomorrow. In 1979, he recorded La Cuna for CTI records and produced a salsa record for Fania, titled Ricanstruction, which was named 1980 "Best Album" by Latin N.Y. Magazine, with Barretto crowned as Conga Player of the Year.[1][2][3]

In 1990, Barretto won his first Grammy for the album Ritmo en el Corazón ("Rhythm in the Heart"), which featured the vocals of Celia Cruz.

Also in the 1990s, a Latin agent, Chino Rodríguez, approached Barretto with a concept he also pitched to Larry Harlow. The idea was "The Latin Legends of Fania", and Barretto, Harlow, Yomo Toro, Pete "el Conde" Rodrguez, Junior González, Ismael Miranda, and Adalberto Santiago came together and formed "The Latin Legends of Fania", booked by Chino Rodríguez of Latin Music Booking.com. In 1999, Barretto was inducted into the International Latin Music Hall of Fame.[1][2][3]

Barretto lived in New York and was an active musical producer, as well as the leader of a touring band which embarked on tours of the United States, Africa, Europe, Israel and Latin America.[1][2][3]

Barretto died of heart failure and complications of multiple health issues on February 17, 2006 at the Hackensack University Medical Center in New Jersey. His body was flown to Puerto Rico, where Barretto was given formal honors by the Institute of Puerto Rican Culture; his remains were cremated.[1][2][3]

With the Red Garland Trio

This article uses material from the article Ray Barretto from the free encyclopedia Wikipedia and it is licensed under the GNU Free Documentation License.

Blues For Nicole Silvan Zingg
Update Required To play the media you will need to either update your browser to a recent version or update your Flash plugin.