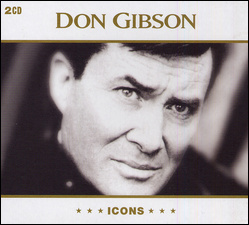 Donald Eugene Gibson (April 3, 1928 – November 17, 2003) was an American songwriter and country musician. A Country Music Hall of Fame inductee, Gibson wrote such country standards as "Sweet Dreams" and "I Can't Stop Loving You", and enjoyed a string of country hits ("Oh Lonesome Me") from 1957 into the mid-1970s.

Don Gibson was born in Shelby, North Carolina, into a poor working-class family, and he dropped out of school in the second grade.

His first band was called Sons of the Soil, with whom he made his first recording in 1948.

In 1957, he journeyed to Nashville to work with producer Chet Atkins and record his self-penned songs "Oh Lonesome Me"[1] and "I Can't Stop Loving You" for RCA Victor. The afternoon session resulted in a double-sided hit on both the country and pop charts.

Gibson was nicknamed "The Sad Poet" because he frequently wrote songs that told of loneliness and lost love. His song "I Can't Stop Loving You", has been recorded by over 700 artists, most notably by Ray Charles in 1962. He also wrote and recorded "Sweet Dreams", a song that would become a major 1963 crossover hit for Patsy Cline. Roy Orbison was a great fan of Gibson's songwriting, and in 1967, he recorded an album of his songs simply titled Roy Orbison Sings Don Gibson. Gibson's wide appeal was also shown in Neil Young's recorded version of "Oh Lonesome Me" on his 1970 album After the Gold Rush, which is one of the few songs Young has recorded that he did not write.

Following his death from natural causes on November 17, 2003, he was buried in the Sunset Cemetery in his hometown of Shelby, North Carolina.

Located in Cleveland County, North Carolina, the Don Gibson Theater opened on November 2009 in historic uptown Shelby. Originally constructed in 1939, the renovated art deco gem features an exhibit of the life and accomplishments of singer/songwriter Don Gibson, an intimate 400-seat music hall, and adjoining function space that can accommodate up to 275 people.

This article uses material from the article Don Gibson from the free encyclopedia Wikipedia and it is licensed under the GNU Free Documentation License.

Strictly Confidencial Koblizek & Baumgartner
Update Required To play the media you will need to either update your browser to a recent version or update your Flash plugin.