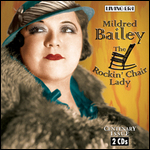 Born Mildred Rinker in Tekoa,[1] Washington, her mother, Josephine, was an enrolled member of the Coeur d'Alene Tribe[2] and a devout Roman Catholic.[3] Her father, Charles, played fiddle and called square dances. Her mother played piano every evening after supper and taught Mildred to play and sing. Her brothers were the vocalist and composer Al Rinker, and the lyricist Charles Rinker.

At the age of seventeen, Bailey moved to Seattle and worked as a sheet music demonstrator at Woolworth's. She married and divorced Ted Bailey, keeping his last name because she thought it sounded more American than Rinker.[3] With the help of her second husband, Benny Stafford, she became an established blues and jazz singer on the West Coast. According to Gary Giddins' book Bing Crosby A Pocketful of Dreams The Early Years 1903-1940, in 1925 she secured work for her brother, Al Rinker, and his partner Bing Crosby. Giddins further states that Crosby first heard of Louis Armstrong and other Chicago black jazz records from Bailey's own record collection. Crosby helped Bailey in turn by introducing her to Paul Whiteman. She sang with Paul Whiteman's band from 1929 to 1933 (Whiteman had a popular radio program and when Bailey debuted with her version of "Moaning Low" in 1929, public reaction was immediate, although she did not start recording with Whiteman until late 1931).

Her first two records were as uncredited vocalist for an Eddie Lang Orchestra session in 1929 ("What Kind O' Man Is You?", an obscure Hoagy Carmichael song that was only issued in the UK) and a 1930 recording of "I Like To Do Things For You" for Frankie Trumbauer. She was Whiteman's popular female vocalist through 1932 (recording in a smooth crooning style), when she left the band due to salary disagreements. She then recorded a series of records for Brunswick in 1933 (accompanied by The Dorsey Brothers), as well an all-star session with Benny Goodman's studio band in 1934 that featured Coleman Hawkins.

In the mid-1930s, she recorded with her third husband Red Norvo. A dynamic couple, they earned the nicknames "Mr. and Mrs. Swing". During this period (1936-1939) Norvo recorded for Brunswick (with Bailey as primary vocalist) and Bailey recorded her own set of recordings for Vocalion, often with Norvo's band. Some of her recordings instead featured members of Count Basie's band. Despite her divorce from Norvo, she and Red would continue to record together until 1945. Suffering from diabetes and depression, she only made a few recordings following World War II.

Mildred Bailey died December 12, 1951, in Poughkeepsie, New York, of heart failure, aged 44, chiefly due to her diabetes. Her ashes were scattered. Red Norvo outlived Bailey by nearly half a century, dying in April 1999, a week after his 91st birthday.

The following are some of Bailey's most well-known swing recordings

In 1989, Bailey was inducted into the Big Band and Jazz Hall of Fame.

This article uses material from the article Mildred Bailey from the free encyclopedia Wikipedia and it is licensed under the GNU Free Documentation License.

Dalmatia Philipp Rellstab
Update Required To play the media you will need to either update your browser to a recent version or update your Flash plugin.