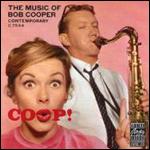 Bob Cooper (December 6, 1925 August 5, 1993) was a West Coast jazz musician known primarily for playing tenor saxophone, but also for being one of the first to play solos on oboe.[1] He worked in Stan Kenton's band starting in 1945 and married the band's singer June Christy. He had the nickname "Coop".[2]

This article uses material from the article Bob Cooper (musician) from the free encyclopedia Wikipedia and it is licensed under the GNU Free Documentation License.

The Best Man Freddy Cole
Update Required To play the media you will need to either update your browser to a recent version or update your Flash plugin.