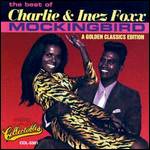 Charlie Foxx began singing with a gospel choir as a child in the early 1950s, and was later joined by his sister Inez. In 1960 Inez traveled to New York City and recorded for Brunswick Records using the name Inez Johnston, but with little success. In early 1963, the pair introduced themselves to Henry 'Juggy' Murray, the owner of Sue Records, and sang him their arrangement of the traditional lullaby "Hush, Little Baby". The song, re-titled "Mockingbird", was released in 1963 and made the Top 10 on both the US rhythm and blues and pop charts.[2] It was their most successful record, and was later covered by artists including Aretha Franklin, James Taylor, Carly Simon, Dusty Springfield, Etta James with Taj Mahal and Toby Keith.

The record company, keen to promote Inez Foxx as a solo singer, issued later recordings under her name alone, despite the presence of two voices on the records. Perhaps because "Mockingbird" was seen as a novelty record, the pair had difficulty following it up, although "Ask Me" and "Hurt by Love" made the lower reaches of the US charts, and "Hurt by Love" also reached the UK singles chart.[2] In 1966 the pair joined Musicor Records and recorded for its subsidiary label, Dynamo. They returned to the pop charts in 1967 with "(1-2-3-4-5-6-7) Count the Days", and became known for their exciting live performances. A highlight was Inez's rendition of "I Stand Accused", which finished with a supposedly distraught Inez singing the last verse, while being carried offstage by Charlie. They toured extensively in Europe and their music played a key role in the development of the Northern Soul movement.

Inez Foxx married songwriter and producer Luther Dixon in the late 1960s. Together they wrote, and he produced, The Platters' mid-1960s return to hit-making with the single "I Love You 1000 Times".[3] Luther Dixon produced Inez and Charlie's 1967 Dynamo album Come By Here,[4][5] but the couple later divorced.[3]

Inez also had some success recording on her own, beginning in 1969, but her popularity faded in the 1970s. Charlie was already working as a songwriter and record producer when they finally disbanded their act. Inez continued to record as a solo singer for Volt Records in the 1970s.[1][2]

This article uses material from the article Inez and Charlie Foxx from the free encyclopedia Wikipedia and it is licensed under the GNU Free Documentation License.

Le boléro des contrôlerus Martin Abbuehl's Swing Express
Update Required To play the media you will need to either update your browser to a recent version or update your Flash plugin.