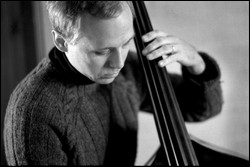 Marc Alan Johnson (born 21 October 1953 in Omaha, Nebraska, USA) is an American jazz musician (double bass), composer and band leader, married to the Brazilian jazz singer and pianist Eliane Elias. Johnson was born in Nebraska, but grew up in Texas.[1]

At the age of 19, Johnson was working professionally with the Fort Worth Symphony, and while at the University of North Texas, he played in the One O'Clock Lab Band and was also the principal bassist in the NTSU Symphony.

In 1978, Johnson joined legendary pianist Bill Evans' in what would be Evans's last trio. Johnson toured and recorded with Evans until the death of the pianist in 1980.[1] In 2007 he released the tribut album Something For You, to Evans together with his wife Eliane Elias.[2]

His many recording credits since then include discs with Joe Lovano, Michael Brecker, Stan Getz, Bob Brookmeyer, Gary Burton, John Abercrombie, Bill Frisell, Pat Metheny, Eliane Elias, Enrico Pieranunzi, Joey Baron, Philly Joe Jones, Jack DeJohnette, Peter Erskine, Paul Motian and many others. He has also appeared as a leader of his own bands, starting with Bass Desires, a quartet that featured Bill Frisell and John Scofield on electric guitar, with Peter Erskine on drums, which gained international recognition following two ECM recordings in the mid-eighties. He also recorded two CDs of his own group 'Right Brain Patrol' for JMT Records, followed by his Sound of Summer Running release on Verve. His ECM release Shades of Jade was featured in Time's October 17, 2005 issue "5 CDs that Really Swing", as one of the five top jazz releases of the season. It was selected by the Chicago Tribune as one of the 10 best jazz recordings of 2005 and also received the "Danish Music Award" for Best Foreign Release in 2005. It features his wife, pianist and composer Eliane Elias, Joe Lovano, on tenor saxophone, John Scofield on guitar and Joey Baron on drums.[1]

This article uses material from the article Marc Johnson (musician) from the free encyclopedia Wikipedia and it is licensed under the GNU Free Documentation License.

Tain't No Use Maxine Sullivan
Update Required To play the media you will need to either update your browser to a recent version or update your Flash plugin.