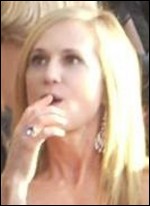 Holly Hunter (born March 20, 1958) is an American actress. Hunter starred in The Piano for which she won the Academy Award for Best Actress. She has also been nominated for an Oscar for her roles in Broadcast News, The Firm, and Thirteen. Hunter has also won two Emmy Awards with seven nominations and has won a Golden Globe Award with another six nominations.

Holly Hunter was born in Conyers, Georgia, the daughter of Opal Marguerite (née Catledge), a housewife, and Charles Edwin Hunter, a farmer and sporting-goods manufacturer's representative.[1] Hunter earned a degree in drama from Carnegie Mellon University in Pittsburgh, and for a while performed in the theatre scene there, playing ingenue roles at City Theatre, then named the City Players.[2] She eventually moved to New York City and roomed with fellow actress Frances McDormand. Hunter, in 2008, described living in The Bronx "at the end of the D [subway] train, just off 205th Street, on Bainbridge Avenue and Hull Avenue. It was very Irish, and then you could go just a few blocks away and hit major Italian".[3] A chance encounter with playwright Beth Henley, when the two were trapped alone in an elevator, led to Hunter's being cast in Henley's plays Crimes of the Heart (succeeding Mary Beth Hurt on Broadway), and Off-Broadway's The Miss Firecracker Contest. "It was like the beginning of 1982. It was on 49th Street between Broadway and Eighth [Avenue] [...] on the south side of the street", Hunter recalled in an interview. "[We were trapped] 10 minutes; not long. We actually had a nice conversation. It was just the two of us".[3]

Hunter made her screen debut in the 1981 horror movie The Burning. After moving to Los Angeles in 1982, Hunter appeared in TV movies before being cast in a supporting role in 1984's Swing Shift. That year, she had her first collaboration with the writing-directing-producing team of brothers Ethan Coen and Joel Coen, in Blood Simple, making an uncredited appearance as a voice on an answering-machine recording. More film and television work followed until 1987, when thanks to a starring role in the Coens' Raising Arizona and her Academy Award-nominated turn in Broadcast News, Hunter became a critically acclaimed star. She went on to the screen adaptation of Henley's Miss Firecracker; Steven Spielberg's Always, a romantic drama with Richard Dreyfuss; and the made-for-TV 1989 docudrama about the Supreme Court case Roe v. Wade.

Following her second collaboration with Dreyfuss, in Once Around, Hunter garnered critical attention for her work in two 1993 films, resulting in her being nominated for two Academy Awards the same year: Hunter's performance in The Firm won her a nomination as Best Supporting Actress, while her portrayal of a mute Scottish woman entangled in an adulterous affair with Harvey Keitel in Jane Campion's The Piano won her the Best Actress award.

Hunter went on to appear in films such as the comedy-drama Home for the Holidays and the thriller Copycat. She also appreared in David Cronenberg's Crash and as a sardonic angel in A Life Less Ordinary. The following year, she played a recently divorced New Yorker in Richard LaGravenese's Living Out Loud; starring alongside Danny DeVito, Queen Latifah, and Martin Donovan. Hunter rounded out the 1990s with a minor role in the independent drama Jesus' Son and as a housekeeper torn between a grieving widower and his son in Kiefer Sutherland's drama Woman Wanted.

Following a supporting role in the Coens' O Brother, Where Art Thou?, Hunter took top billing in the same year's television movie Harlan County War, an account of labor struggles among Kentucky coal-mine workers. Hunter would continue her small screen streak with a role in When Billie Beat Bobby, playing tennis pro Billie Jean King in the fact-based story of King's famed exhibition match with Bobby Riggs; and as narrator of Eco Challenge New Zealand before returning to film work with a minor role in the 2002 drama Moonlight Mile. The following year found Hunter in the redemption drama Levity. Also in 2003, Hunter had a supporting role in the film Thirteen for which she received a Best Supporting Actress Oscar nomination.

Hunter became an executive producer, and helped develop a starring vehicle for herself with the TNT cable-network drama Saving Grace, which premiered in July 2007. For her acting, she received a Golden Globe Award nomination, two Screen Actors Guild Award nomination, and an Emmy Award nomination. On May 30, 2008 Hunter received a star on the Hollywood Walk of Fame. In 2009, she was awarded the Women in Film Lucy Award.[4]

For many years, Hunter was in a relationship with actor Arliss Howard. She was married to Polish cinematographer Janusz Kamiski from May 20, 1995, until their divorce on December 21, 2001. Since then, she has been in a relationship with American actor Gordon MacDonald, with whom she co-starred in Marina Carr's By the Bog of Cats in a 2001 run at the San Jose Repertory Theater, and in a 2004 West End production of the same play. In January 2006, Hunter's publicist announced that Hunter had given birth to the couple's twins at the age of 47;[5] Entertainment Weekly later reported that the twins were boys. In a 2009 interview, Hunter stated to TV Guide that she does not discuss her children with the media.[6]

This article uses material from the article Holly Hunter from the free encyclopedia Wikipedia and it is licensed under the GNU Free Documentation License.