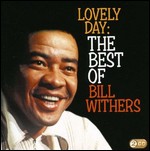 William Harrison Withers Jr. (born July 4, 1938) is an American singer-songwriter and musician who performed and recorded from 1970 until 1985.[1] He recorded several major hits, including "Lean on Me", "Ain't No Sunshine", "Use Me", "Just the Two of Us", "Lovely Day", and "Grandma's Hands". Withers won three Grammy Awards and was nominated for four more. His life was the subject of the 2009 documentary film Still Bill.[1] He was inducted into the Rock and Roll Hall of Fame in 2015.[2]

Withers, the youngest of six children, was born in the small coal-mining town of Slab Fork, West Virginia.[3] He was born with a stutter and has said he had a hard time fitting in.[4] Raised in nearby Beckley, he was 13 years old when his father died.[4] Withers enlisted with the United States Navy at the age of 18 and served for nine years, during which time he overcame his stutter and became interested in singing and writing songs.

He left the Navy in 1965. Using the $250 he received from selling his furniture to IBM co-worker Ron Sierra, he relocated to Los Angeles in 1967 to start a musical career.[4][5] Withers worked as an assembler for several different companies, including Douglas Aircraft Corporation, while recording demo tapes with his own money, shopping them around and performing in clubs at night. When he debuted with the song "Ain't No Sunshine", he refused to resign from his job because he believed the music business was a fickle industry.[4]

During early 1970, Withers' demonstration tape was auditioned favorably by Clarence Avant, owner of Sussex Records. Avant signed Withers to a record deal and assigned former Stax Records stalwart Booker T. Jones to produce Withers' first album.[4] Four three-hour recording sessions were planned for the album, but funding caused the album to be recorded in three sessions with a six-month break between the second and final sessions. Just as I Am was released in 1971 with the tracks, "Ain't No Sunshine" and "Grandma's Hands" as singles. The album features Stephen Stills playing lead guitar.[6] On the cover of the album, Withers is pictured at his job at Weber Aircraft in Burbank, California, holding his lunch box.[3]

At the 14th annual Grammy Awards, on Tuesday, March 14, 1972, Withers won a Grammy Award for Best R&B Song for "Ain't No Sunshine." The track had already sold over one million copies and was awarded a gold disc by the RIAA in September 1971.[7]

During a hiatus from touring, Withers recorded his second album, Still Bill. The single, "Lean on Me" went to number one the week of July 8, 1972. It was Withers' second gold single with confirmed sales in excess of three million.[7] His follow-up, "Use Me" released in August 1972, became his third million seller, with the R.I.A.A. gold disc award taking place on October 12, 1972.[7] His performance at Carnegie Hall on October 6, 1972, was recorded, and released as the live album Bill Withers, Live at Carnegie Hall on November 30, 1972. In 1974, Withers recorded the album +'Justments. Due to a legal dispute with the Sussex company, Withers was unable to record for some time thereafter.

During this time, he wrote and produced two songs on the Gladys Knight & the Pips record I Feel a Song, and in October 1974 performed in concert together with James Brown, Etta James, and B.B. King in Zaire four weeks prior to the historic Rumble in the Jungle fight between Foreman and Ali.[8] Footage of his performance was included in the 1996 documentary film When We Were Kings, and he is heard on the accompanying soundtrack. Other footage of his performance is included in the 2008 documentary film Soul Power, which is based on archival footage of the 1974 Zaire concert.

After Sussex Records folded, Withers signed with Columbia Records in 1975. His first album release with the label, Making Music, Making Friends, included the single "She's Lonely", which was featured in the film Looking for Mr. Goodbar. During the next three years he released an album each year with Naked & Warm (1976), Menagerie (1977, containing the successful "Lovely Day"), "Bout Love" (1978) and "Get on Down"; the latter song also included on the Looking for Mr. Goodbar soundtrack.

Due to problems with Columbia and being unable to get songs approved for his album, he concentrated on joint projects from 1977 to 1985, including "Just the Two of Us", with jazz saxophonist Grover Washington Jr., which was released during June 1980.[10] It won a Grammy on February 24, 1982. Withers next did "Soul Shadows" with the Crusaders, and "In the Name of Love" with Ralph MacDonald, the latter being nominated for a Grammy for vocal performance.

In 1982, Withers was a featured vocalist on the album, "Dreams in Stone" by French singer Michel Berger. This record included one composition co-written and sung by Withers,[11] an upbeat disco song about New York City entitled "Apple Pie."[12] The album was not released in North America, although it contains several songs about America.

In 1985 came Watching You Watching Me, which featured the Top 40-rated R&B single "Oh Yeah", and ended Withers' business association with Columbia Records. Withers stated in interviews that a lot of the songs approved for the album, in particular, two of the first three singles released, were the same songs which were rejected in 1982, hence contributing significantly to the eight-year hiatus between albums.[10] Withers also stated it was frustrating seeing his record label release an album for Mr. T, an actor, when they were preventing him, an actual singer, from releasing his own. He toured with Jennifer Holliday in 1985 to promote what would be his final studio album.[10]

His disdain for Columbia's A&R executives or "blaxperts", as he termed them, trying to exert control over how he should sound if he wanted to sell more albums, played a part in his making the decision to not record or re-sign to a record label after 1985, effectively ending his performing career, even though remixes of his previously recorded music were released after his 'retirement'.[4][13][14][15][16] Finding musical success later in life than most, at 32, he has said he was socialized as a 'regular guy' who had a life before the music, so he did not feel an inherent need to keep recording once he fell out of love with the industry.[4] He has also stated that he does not miss touring and performing live and does not regret leaving music behind.[4][13] He seemingly no longer suffers from the speech impediment of stuttering that affected him during his recording career.[13]

In 1988, a new version of "Lovely Day" from the 1977 Menagerie album, entitled "Lovely Day (Sunshine Mix)" and remixed by Ben Liebrand, reached the Top 10 in the United Kingdom, leading to Withers' performance on the long-running Top of the Pops that year. The original release had reached #7 in the UK in early 1978, and the re-release climbed higher to #4.

In 1987, he received his ninth Grammy Award nomination and on March 2, 1988, his third Grammy for Best Rhythm and Blues Song as songwriter for the re-recording of "Lean on Me" by Club Nouveau on their debut album Life, Love and Pain, released in 1986 on Warner Bros. Records.

In 1996, a portion of his song "Grandma's Hands" was sampled in the song "No Diggity" by BLACKstreet, featuring Dr. Dre. The single went to Number 1 on the Billboard Hot 100 chart and sold 1.6 million copies and won a Grammy in 1998 for Best R&B Performance by a Duo or Group with Vocals.

Withers contributed two songs to Jimmy Buffett's 2004 release License to Chill. Following the reissues of Still Bill on January 28, 2003, and Just As I Am on March 8, 2005, there was speculation of previously unreleased material being issued as a new album.[17] In 2006, Sony gave back to Withers his previously unreleased tapes.

On January 26, 2014, at the 56th annual Grammy Awards in Los Angeles, Bill Withers: The Complete Sussex & Columbia Albums Collection, a nine-disc set featuring Withers's eight studio albums, as well as his live album Live at Carnegie Hall, received the "Best Historical" Grammy Award (in a tie with The Rolling Stones' "Charlie Is My Darling - Ireland 1965.") The award was presented to Leo Sacks, who produced the collection, and the mastering engineers Mark Wilder, Joseph M. Palmaccio and Tom Ruff.

On October 1, 2015, there was a tribute concert at Carnegie Hall in his honor, featuring Aloe Blacc, Ed Sheeran, Dr. John, Michael McDonald and Anthony Hamilton recreating his 1973 concert album, Live at Carnegie Hall, along with other Withers material. Withers was in attendance and spoke briefly onstage.[19][20]

On February 12, 2017, he made an appearance on MSNBC to talk about the refugee crisis, as well as the political climate in America.

Withers married actress Denise Nicholas in 1973, during her stint on the sitcom Room 222. The couple divorced the following year.[21] In 1976, Withers married Marcia Johnson, and they had two children, Todd and Kori.[4] Marcia eventually assumed the direct management of his Beverly Hills-based publishing companies, in which his children also became involved as they became adults.[22]

This article uses material from the article Bill Withers from the free encyclopedia Wikipedia and it is licensed under the GNU Free Documentation License.

Why Do I Love You André Previn
Update Required To play the media you will need to either update your browser to a recent version or update your Flash plugin.