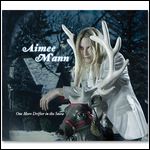 Aimee Mann (born September 8, 1960) is an American rock singer-songwriter, bassist and guitarist who has been called a genius lyricist[1][2] and named one of the world's top 10 greatest living songwriters.[3]

She was the bassist and a vocalist for the band 'Til Tuesday during the 1980s, and since then, she has primarily released albums and performed as a solo musician.

Mann grew up in Bon Air, Virginia, attended Midlothian High School in Chesterfield County, and graduated from Open High School[4] in Richmond, Virginia. In 1978, Mann enrolled in Berklee College of Music in Boston, Massachusetts. She dropped out of Berklee and joined the Boston punk band the Young Snakes. In 1983, the band released the EP Bark Along with the Young Snakes.

In 1983, Mann co-founded the new wave band 'Til Tuesday with Berklee classmate and boyfriend Michael Hausman (who went on to manage her solo career). In 1985, the band released Voices Carry, the debut album with the title track inspired by the band's guitarist, Robert Holmes', relationship with his wife. It won the MTV Video Music Award for Best New Artist.

In 1986, the band released Welcome Home, their second album. In 1987, she sang vocals with Geddy Lee on the single "Time Stand Still" by rock band Rush from their 1987 album Hold Your Fire. She also appeared in the music video for the song.[5]

In 1988, the band released Everything's Different Now, their third and final album. Shortly after its release, Mann said that she was much more pleased with it than the debut, primarily because she felt it made more of a personal statement about her life.[6] The band broke up in 1990 when Mann left to start her solo career.[5]

In 1993, Mann released her debut solo album, Whatever, which sold modestly but met with critical praise. In 1995, Mann released I'm with Stupid, her second album, through Geffen Records[7] which, like her debut, garnered positive reviews but modest commercial success. In 1999, Mann recorded original material for the soundtrack to the Paul Thomas Anderson film Magnolia, which earned both Academy Award and Grammy Award nominations for the song "Save Me". She negotiated a contract release from David Geffen and founded her own label, SuperEgo Records.

In 2000, Mann released Bachelor No. 2, released on SuperEgo, which included some songs from the 1999 film Magnolia and new material. Also that year, she and her husband formed a concept called Acoustic Vaudeville, a mixture of music and stand-up comedy. Among the comedians joining them for shows were Janeane Garofalo, Patton Oswalt and David Cross.[8]

In 2001, she joined the judging panel for the 1st Annual Independent Music Awards.

In 2002, Mann released Lost in Space, an album which features art by Seth. The song High on Sunday 51 from this album was used on the soundtrack of Third Watch, Season 4, Episode 13 (Snow Blind). The following year she released Lost in Space Special Edition, which features a second disc containing six live recordings (including a version of Coldplay's "The Scientist") as well as two B-sides and two previously unreleased songs.

In 2004, Mann released Live at St. Ann's Warehouse, a live album and DVD recorded at a series of shows in Brooklyn, New York.

In 2005, Mann released The Forgotten Arm, a concept album set in the 1970s about two lovers who meet at the Virginia State Fair and go on the run. The Joe Henry-produced album, which was recorded mostly live with few overdubs, contains illustrations which reflected Mann's interest in boxing. She trained with the boxing trainer Freddie Roach;[9] the album's title is derived from a boxing move in which one arm is used to hit the opponent, causing him to "forget" about the other, which is then used to deliver a harsher blow. The following year Mann received a Grammy Award for Best Recording Package for her contribution in the album's artwork (shared with Gail Marowitz).

In 2006, Mann released One More Drifter in the Snow, a Christmas album featuring both covers and new songs. The album's iTunes version replaced "Christmastime" (a duet with husband Michael Penn) with a cover of Joni Mitchell's "River" and "Clean Up for Christmas" from The Forgotten Arm; an updated version of the CD was released two years later with the Joni Mitchell cover.

In 2008, Mann released @#%&*! Smilers, which features Grammy-nominated artwork by Gary Taxali. The album debuted on the Billboard 200 at number 32 and on the Top Independent Albums chart at number 2.[10] @#%&*! Smilers was met with mostly praise, with Billboard stating that it "pops with color, something that gives it an immediacy that's rare for an artist known for songs that subtly worm their way into the subconscious... Smilers grabs a listener, never making him or her work at learning the record, as there are both big pop hooks and a rich sonic sheen."[11] The music video for the song "31 Today", directed by Bobcat Goldthwait, features comedian Morgan Murphy.[12]

In 2009, Mann announced that she was working on a musical based on her album The Forgotten Arm[13] but later stated that it was put on hold owing to similarities to the film The Fighter (2010).

In 2011, Mann participated on the 10th Annual Independent Music Awards judging panel, marking a consecutive year and third overall appearance as a judge with the organization.

In 2012, Mann released Charmer, an album which features a duet with James Mercer of the Shins. Two singles were released from the album - the title track, which featured a music video directed by The Best Show's Tom Scharpling; and "Labrador," which featured actor Jon Hamm and references to Mann's music video work with 'Til Tuesday.

In February 2013, Mann and Ted Leo started playing together in a collaborative project called #BOTH and scheduled shows in Los Angeles and San Francisco.[18] The band name was later changed to the Both. In April 2014, she collaborated with Leo on The Both, their first album.[19] Mann co-wrote the album, as well as providing bass and co-lead vocals alongside Leo.

On July 22, 2013, Mann filed a lawsuit against MediaNet Digital Inc. claiming they were distributing 120 of her songs on an expired license agreement.[20] She attempted to claim as much as $18 million in statutory damages.[21] The case has since been dropped.[22]

In October 2016, Mann released a new song, "Can't You Tell," which was part of the 30 Days 30 Songs campaign in which musicians put out previously unreleased music in protest of then presidential candidate Donald Trump.

In January 2017, Mann announced Mental Illness, her ninth solo album. The album's lead single, "Goose Snow Cone," was released on the same day. On March 27 Mann performed the song with Jon Batiste and Stay Human on Late Show with Stephen Colbert. The album was released on March 31, 2017; with Mann releasing the album independently.

In September 2017, Mann contributed a song "Everybody Bleeds" to Season 1, episode 2 of the Netflix original series Big Mouth.

In 1997, Mann married songwriter Michael Penn (brother of actors Sean Penn and Chris Penn), whom she met in the 1980s. They courted while Mann was recording Whatever. Mann had previously been in a relationship with XTC guitarist David Gregory.

Appearances on other artists' albums

In 1987, she sang on Rush's song "Time Stand Still" on the album Hold Your Fire. The single is credited as "Rush (featuring Aimee Mann)".

In 1995, she recorded a cover version of Harry Nilsson's "One" on the album For the Love of Harry: Everybody Sings Nilsson and in 1996, "Baby Blue" on the Badfinger tribute album Come and Get It. In 1997, Mann recorded a cover of "Nobody Does It Better", the theme song of the James Bond film The Spy Who Loved Me, on the album Shaken and Stirred: The David Arnold James Bond Project.

In 2004, Mann sang on the song "That's Me Trying" from William Shatner's album Has Been (co-written and produced by Ben Folds).

In 2007, she contributed vocals on the song "Unforgiven" from John Doe's album A Year In The WIlderness.

In 2012, she contributed vocals to Steve Vai's album The Story of Light, on the song "No More Amsterdam". That same year, she recorded the song "Two Horses" for the soundtrack of the film Tim and Eric's Billion Dollar Movie. Her song "Wise Up" was also used for an organ-donor campaign in Ontario.[24] She contributed vocals to the song "Bigger Than Love" on Ben Gibbard's album Former Lives.[25]

In 2014, Mann contributed a version of Styx's "Come Sail Away" to the Community episode "Geothermal Escapism".[26]

In 1998, Aimee Mann made a cameo appearance in the film The Big Lebowski as a German nihilist who sacrifices her green nail polished right little toe in a kidnapping scheme.[27]

In 2002, Mann and her band appeared as themselves in Buffy the Vampire Slayer, performing her songs "This Is How It Goes" and "Pavlov's Bell" at the Bronze. She has one line in the episode: "Man, I hate playing vampire towns." The latter song also appears on the Buffy soundtrack album Radio Sunnydale. Also that year, she and her band appeared on The West Wing, where they performed a cover of James Taylor's "Shed a Little Light" at a Rock the Vote concert.[28]

In 2006, Mann appeared on an episode[29] of the television series Love Monkey. In 2007, she contributed two original songs, "The Great Beyond" and "At the Edge of the World", for the soundtrack to Arctic Tale. In 2008, Mann appeared in the Comedy Central series Lewis Black's Root of All Evil in a comedic interview conducted by comedian Paul F. Tompkins.

In 2011, she appeared on the Independent Film Channel series Portlandia; in the sketch, she plays herself working as a cleaning woman, and tells Fred Armisen and Carrie Brownstein that she needs the second job to make ends meet.[30]

In 2013, Mann had a cameo on the April 8 episode of The Daily Show in a mock appeal to preserve the "habitat" of the crab louse, in a comedy segment about pubic shaving. In 2014, Mann voice acted on Steven Universe, providing the voice of Opal in episode "Giant Woman". On November 20, 2014, Mann appeared with Dana Gould and Nick Offerman on @midnight on Comedy Central, and on March 21, 2016, Mann made a second appearance on the show with Jonathan Coulton and Dave Hill.

On August 19, 2015 Mann appeared with the Both band member Ted Leo on Conan performing an unsolicited campaign song for 2016 presidential candidate Lincoln Chafee.

In 2016, Mann covered the Carpenters’ hit 1973 single Yesterday Once More for episode 2 of HBO's Vinyl. In the episode, Natalie Prass cameos as the visage of Karen Carpenter, lip syncing Mann’s cover in a car with Olivia Wilde’s character during a dream sequence.

This article uses material from the article Aimee Mann from the free encyclopedia Wikipedia and it is licensed under the GNU Free Documentation License.

Stardust Nick Perrin & Stewy von Wattenwyl
Update Required To play the media you will need to either update your browser to a recent version or update your Flash plugin.