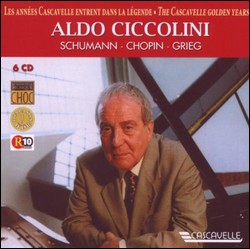 Aldo Ciccolini was born in Naples. His father, who bore the title of Marquis of Macerara, worked as a typographer. He took his first lessons with Maria Vigliarolo d'Ovidio, and entered Naples Conservatory in 1934 at the age of 9, by special permission of the director, Francesco Cilea. There he studied piano with Paolo Denza, a pupil of Ferruccio Busoni, and harmony and counterpoint with Achille Longo.

He began his performing career playing at the Teatro San Carlo at the age of 16. However, by 1946 he was reduced to playing in bars to support his family. In 1949, he won, ex-aequo (tied) with Ventsislav Yankov, the Marguerite Long-Jacques Thibaud Competition in Paris (among the other prizewinners were Paul Badura-Skoda and Pierre Barbizet). He became a French citizen in 1969 and taught at the Conservatoire de Paris from 1970-88, where his students included Akiko Ebi, Jean-Yves Thibaudet, Artur Pizarro, Nicholas Angelich, André Sayasov and Jean-Luc Kandyoti.[1] Other students included Francesco Libetta, Domenico Piccichè, Ivan Donchev and Jean-Marc Savelli.

Ciccolini was a celebrated interpreter and advocate of the piano music of the French composers Camille Saint-Saëns, Maurice Ravel, Claude Debussy, Charles-Valentin Alkan and Erik Satie as well as that of less prominent composers such as Déodat de Séverac, Jules Massenet and Alexis de Castillon.

Ciccolini was known for his having played the music of the Spanish composers Isaac Albéniz, Enrique Granados, and Manuel de Falla, as well as of Franz Liszt. Soprano Dame Elisabeth Schwarzkopf said of him "I have hardly met a more wonderful partner and a more delightful companion."

On 9 December 1999, he celebrated a career in France spanning 50 years with a recital at the Théâtre des Champs-Élysées in Paris.

In 2002 Ciccolini was awarded the Diapason d'Or for his recording of the entire solo piano works of Janáček for Abeille Music and of Schumann for Cascavelles. His complete Beethoven sonata cycle was re-published by the Cascavelle label in 2006. He also recorded such unusual repertoire as selections from the Péchés de vieillesse by Rossini.

This article uses material from the article Aldo Ciccolini from the free encyclopedia Wikipedia and it is licensed under the GNU Free Documentation License.

The Frim Fram Sauce Maya Fadeeva
Update Required To play the media you will need to either update your browser to a recent version or update your Flash plugin.