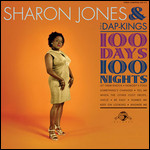 Sharon Lafaye Jones (born May 4, 1956) is an American soul/funk singer. She is the lead singer of Sharon Jones & The Dap-Kings, a band at the forefront of a revivalist movement that aims to recapture the feeling of soul and funk music as it was at its height in the late 1960s to mid-1970s. Despite trying to forge a career as a professional singer since an early age, it has only been in her middle age that Jones has experienced breakthrough success.[1]

Born in Augusta, Georgia, Jones moved to New York at an early age. As a child, she and her brothers would often imitate the singing and dancing of James Brown. A regular gospel singer in church, Jones often entered talent shows backed by local funk bands in the early 1970s. Session work then continued with backing singing, often credited to Lafaye Jones, but in the absence of any recording contract as a solo singer, she spent many years working as a corrections officer at Rikers Island and as an armored car guard for Wells Fargo Bank, until receiving a mid-life career break in 1996 after she appeared on a session backing soul and deep funk legend Lee Fields.

The session was organized by Gabriel Roth and Philip Lehman, owner of the now defunct French record label Pure Records. Jones was the only one of three singers who were called into the session to show. Having completed all the backing parts herself, Roth and Lehman were suitably impressed with her performance and recorded "Switchblade", a solo track with Jones. This track and "The Landlord" were included on the Soul Providers' album Soul Tequila, released by Philip Lehman on Pure circa 1996. The Soul Providerswith members of the Brooklyn, New York City, bands Antibalas and the Mighty Imperialswould later go on to form the Dap-Kings, Jones' current backing band.[2]

Lehman and Roth decided to start a new label based in Brooklyn called Desco Records, now also defunct. Soul Tequila was re-released as Gimme the Paw which omitted "The Landlord" but kept "Switchblade". Jones however recorded and released three singles on 45 for the Desco label, "Damn It's Hot" (part 1) backed by (part 2), "Bump N Touch" (part 1) backed by "Hook and Sling Meets the Funky Superfly" (a medley cover of Eddie Bo and Bobby Williams tracks), and "You Better Think Twice" backed by "I Got the Feeling" (a James Brown cover). The 45s gained some notice amongst 45 soul and funk collectors, particularly because in the early days of Desco Records some collectors may have believed the 45s to be originals from the early seventies, as they were never dated. These 45s were also released on a compilation CD, the Desco Funk 45' Collection, alongside various other artists in the Desco stable. The Desco label itself had established a firm reputation amongst enthusiasts. Desco continued to release 45 singles and also released LPs by Lee Fields, The Sugarman 3, The Daktaris and The Mighty Imperials as well as a further compilation of funk 45s. The Mighty Imperials album proved to be the last release on the Desco label, and due to a difference of opinions label owners Lehman and Roth parted ways in 2000. Lehman started another independent, Soul Fire Records, now also defunct, whilst Gabriel Roth went on to start Daptone Records with saxophonist Neal Sugarman of Sugarman 3.

Launched on the back of the popularity of Desco Records, Daptone Records' first release would be a full length Sharon Jones album. A new band, the Dap-Kings, was formed from the ashes of the Soul Providers and the Mighty Imperials. Some of the musicians went on to record for Philip Lehman's Soul Fire label, while some formed the Afro-beat band the Budos Band. From the original Soul Providers, Roth (AKA Bosco Mann) on bass, guitarist and emcee Binky Griptite, percussionist Fernando Velez, trumpet player Anda Szilagyi and organist Earl Maxton were joined by original Mighty Imperials saxophonist Leon Michels and drummer Homer Steinweiss, plus Neal Sugarman from Sugarman 3, to form The Dap-Kings.

In 2002, under the name Sharon Jones & The Dap-Kings, the group released an album Dap Dippin' with Sharon Jones and the Dap-Kings for which they received immediate attention and acclaim from enthusiasts, DJs and collectors. With three more albums under their belt, Naturally (2005), 100 Days, 100 Nights (2007) and I Learned the Hard Way (2010) they are seen by many as the spearhead of a revivalist soul and funk movement. They are particularly well-respected amongst their fans and contemporaries for successfully capturing the essence of soul as it was at its height in the late 1960s and early 1970s.

Jones had a small part in the 2007 film The Great Debaters, starring Denzel Washington and Forest Whitaker, as Lila, a juke joint singer. Her performance of Lucille Bogan's "That's What My Baby Likes" is featured in the film, and Jones' additional covers of 1930s-era songs are included on the film's soundtrack.

Jones sang backup for Phish during their 2009 Halloween performance of The Rolling Stones' Exile on Main St., in Indio, California at Festival 8.

Jones performed a duet of "Baby (You've Got What It Takes)" with Michael Bublé on his 2009 album Crazy Love.

She has performed on tour with Lou Reed, although her appearance in The Great Debaters caused Jones to turn down a stint as back-up singer for Reeds fall 2007 live show built around his Berlin album.[2] She performs one song on the David ByrneFatboy Slim collaboration, Here Lies Love.

It was announced on June 3, 2013, that Jones has been diagnosed with bile duct cancer and underwent surgery, which forced her to postpone the release of the group's fifth album, Give the People What They Want.[4] The diagnosis was later changed to Stage Two pancreatic cancer, for which Jones underwent chemotherapy.

In November 2013, Sharon Jones & The Dap-Kings announced their return to the world stage, with US and European tours, and a new album release date of 1/14/14.

On November 28, 2013, Sharon Jones & The Dap-Kings performed on a float during the 87th annual Macy's Thanksgiving Day Parade.[5]

Sharon Jones and the Dap-Kings

This article uses material from the article Sharon Jones (singer) from the free encyclopedia Wikipedia and it is licensed under the GNU Free Documentation License.