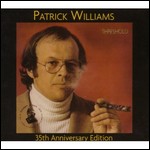 Born in Missouri, Williams grew up in Connecticut and received a degree in history from Duke University, where he directed the student-run jazz big band, known as the Duke Ambassadors, from 1959-1961. Since music was always his first love, he went on to Columbia University to study music composition and conducting, where his passion became his profession. He quickly became busy as an arranger in New York; he moved to California in 1968 to pursue work in the movie and television field while continuing to write and arrange jazz albums.

Williams has also been a leader in the music-education field for many years. He served as the Artistic Director of the Henry Mancini Institute - one of the nation's premier training programs for young musicians seeking professional careers in music - for five years. He has been Visiting Professor and Composer-in-Residence at the University of Utah and the University of Colorado, which awarded him an honorary doctorate. He also holds an honorary doctorate from Duke University and has performed and/or lectured at such other institutions as the Berklee College of Music, Indiana University, Texas Christian University, UCLA, USC, and Yale University.

Nominated for the Pulitzer Prize for composing the orchestral work An American Concerto, he has won two Grammys for his jazz arrangements, four Emmys for his television music, an Oscar nomination for film composition, and the Richard Kirk Award from BMI.

Williams has scored more than 200 films, including Breaking Away, which received a 1978 Oscar nomination; All of Me, Swing Shift, Cuba, Casey's Shadow, and The Grass Harp. For television, his music has accompanied shows such as Columbo, Lou Grant, The Mary Tyler Moore Show, The Bob Newhart Show, The Streets of San Francisco, and The Days and Nights of Molly Dodd. His jazz-funk arrangement of The Beatles' "Get Back" was used as the longtime theme for the 1970s sports quiz show Sports Challenge, emceed by Dick Enberg.

In addition to Williams' 4 Emmys, he has received 23 nominations.

Several of Williams' recordings are considered contemporary big-band standards, including Threshold, which won a 1974 Grammy; Too Hip for the Room, a Grammy nominee in 1983; Tenth Avenue, a double Grammy nominee in 1987; and Sinatraland, a tribute to the singer which was Grammy-nominated in 1998. Williams has received 16 Grammy nominations for his compositions and arrangements.

Frank Sinatra asked Williams to arrange and conduct his two Duets albums. For clarinetist Eddie Daniels, Williams wrote A Concerto in Swing; for saxophonist Tom Scott, he penned Romances for Jazz Soloist and Orchestra. His Theme For Earth Day was recorded by John Williams and the Boston Pops. And his most recent compositions, Adagio for Orchestra and August are currently being programmed by orchestras in the U.S. and abroad.

An American Concerto, composed in 1976, was one of the first successful attempts to combine jazz elements with traditional symphonic writing.

"His An American Concerto is, in my opinion, the best mixture of jazz and classical that anybody has ever done," says respected music critic Gene Lees. "Pat's writing is breathtaking. He's just one of the finest arrangers and composers who ever put pen to paper." Daniel Cariaga wrote in the Los Angeles Times: "An American Concerto must be one of the most attractive, affecting and original of jazz-symphonic meldings. The style is unrestrained, the tunes ingratiating, the writing expert. What Williams owes to the fair influences of Debussy, Bartok, Stravinsky and Rachmaninoff seems no more and no less than other living composers may owe in those directions. What sets him a cut above others is the individual integration he has achieved out of those influences."

One of Williams' accomplishments is the 1986 orchestral tour-de-force Gulliver. He spent eight months writing the work, which was recorded by London's Royal Philharmonic Orchestra, with narration by Larry Gelbart (based on Jonathon Swift's writings) read by John Gielgud. For the concert premier, Williams conducted the Yale Philharmonia with Tony Randall narrating.

Critics have also praised Williams' numerous concert-hall works. In addition to An American Concerto, Gulliver, Romances, Earth Day, Adagio, and August, they have included Suite Memories for trombone and symphony orchestra, which won a 1986 Grammy; Spring Wings, a double concerto for piano and saxophone and symphony orchestra; Appalachian Morning, recorded by the Boston Pops; Memento Mei for solo soprano and orchestra; The Prayer of St. Francis for flute and strings; and others.

This article uses material from the article Patrick Williams (composer) from the free encyclopedia Wikipedia and it is licensed under the GNU Free Documentation License.

Close To You Lucky Wüthrich
Update Required To play the media you will need to either update your browser to a recent version or update your Flash plugin.