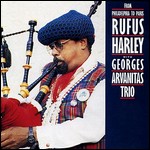 Rufus Harley, Jr. (May 20, 1936 near Raleigh, North Carolina – August 1, 2006 in Philadelphia, Pennsylvania) was an American jazz musician of mixed Cherokee and African ancestry, known primarily as the first jazz musician to adopt the Scottish great Highland bagpipe as his primary instrument.

Although born near Raleigh, North Carolina, at an early age Harley moved with his mother to a poor neighborhood in North Philadelphia, Pennsylvania. He began playing the C melody saxophone at age 12, and also played trumpet. At the age of 22, he began studying saxophone, flute, oboe, and clarinet with Dennis Sandole (1913-2000), an Italian American jazz guitarist who also taught several other Philadelphia jazz musicians.[1]

Harley became inspired to learn the bagpipe after seeing the Black Watch perform in John F. Kennedy's funeral procession in November 1963. Then a maintenance worker for the Philadelphia's housing authority, Harley began searching the city for a set of bagpipes. Failing to find one, he traveled to New York City where he found a set in a pawn shop. He purchased the instrument for US$120, quickly adapting it to the idioms of jazz, blues, and funk. On several occasions, when a neighbor called the police to complain about Harley's practicing in his apartment, he would quickly put away his bagpipes and feign ignorance, asking the officers, "Do I look like I'm Irish or Scottish to you?"[2] He eventually acquired a better set of bagpipes, which cost him a little over US$1,000.[3]

Harley made his bagpipe performance debut in 1964. From 1965 to 1970 he released four recordings as leader on the Atlantic label (all produced by Joel Dorn, an early supporter), also recording as a sideman with Herbie Mann, Sonny Stitt, and Sonny Rollins in the 1960s and 1970s. He later recorded with Laurie Anderson (appearing on her 1982 album Big Science) and The Roots (on their 1995 album Do You Want More?!!!??!), the latter coming about due to a 1994 appearance on The Arsenio Hall Show. In addition to bagpipes, on these albums he also occasionally plays tenor saxophone, flute, or electric soprano saxophone.

Harley often wore Scottish garb, including a kilt, in conjunction with a Viking-style horned helmet. After seeing him perform on television, a Scottish family gave him his tartan, the MacLeod tartan, which he wore for the rest of his life.[3] His bagpipe technique was somewhat unorthodox in that he placed the drones over his right shoulder rather than his left. He favored the key of B-flat minor.

Harley lived for much of his life in the Germantown neighborhood of Northwest Philadelphia, Pennsylvania, and frequently gave presentations in Philadelphia-area public schools. During his frequent overseas performance tours, he carried and distributed miniature replicas of the Liberty Bell, the symbol of his hometown, as well as American flags and copies of the U.S. Constitution. He appeared on a number of television programs, including What's My Line?, To Tell the Truth (March 22, 1965 [4] and again c. 2000), I've Got a Secret (October 17, 1966),[5] and The Arsenio Hall Show. He also had a small role in Francis Ford Coppola's 1966 comedy film You're a Big Boy Now, as well as Eddie and the Cruisers (1983). In addition to his performing career, he worked for the Philadelphia Housing Authority for many years.

In 1998 the CD album Brotherly Love was released, on the Tartan Pride label, alongside the book The Jazzish Bagpiper, a photo anthology and conversations with Harley, by Charles A. Powell, the first to compliment Harley's contributions to American music with Celtic bagpipes.[6] Writing in the sleeve notes for the album, Ralph Stevenson Jr., Harley's executive producer, noted:

"Rufus Harley resides in Philadelphia, Pennsylvania. Pennsylvania home of the Liberty Bell. Harley, musical ambassador of the City of Brotherly love, has been received and embraced by tribal leaders, heads of state and many notables from around the world. His message of peace and love is blended in this CD collaboration and lead by his dues paid, musical labor of sax and bagpipes".[7]

His career included performances with many major figures including John Coltrane, Dizzy Gillespie and Dexter Gordon[8]

Harley died at Philadelphia's Albert Einstein Medical Center on August 1, 2006 of prostate cancer.[9] He is survived by his former wife Barbara Jean Jones, 16 children, and 15 grandchildren. One of his sons, Messiah Patton Harley, also of Philadelphia, is a trumpeter who often performed with his father.[10]

A documentary film entitled Pipes of Peace, an intimate profile of the late Philadelphia musician, directed and produced by fellow Philadelphian George Manney, was released by Brotherly Love All-Star Tour productions in 2008.[11]

A posthumous retrospective on Rhino Handmade, Courage - The Atlantic Recordings, was released in November 2006 as a 3,000 copy limited edition, and contains all the tracks from his four Atlantic LPs, plus an unreleased track of Pete Seeger and Joe Hickerson's composition Where Have All the Flowers Gone? recorded in 1969.

This article uses material from the article Rufus Harley from the free encyclopedia Wikipedia and it is licensed under the GNU Free Documentation License.

My One And Only Love Sandra Cartolari
Update Required To play the media you will need to either update your browser to a recent version or update your Flash plugin.