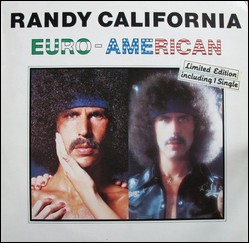 Randy Craig Wolfe (February 20, 1951 – January 2, 1997), known as Randy California, was a guitarist, singer and songwriter and one of the original members of the rock group Spirit, formed in 1967.

California was born into a musical Jewish[1] family in Los Angeles and spent his early years studying varied styles at the family's Los Angeles folk club, the Ash Grove. His uncle, Ed Pearl, was the founder of the Ash Grove.[2] He was 15 years old when his mother Bernice Pearl and new stepfather, Ed Cassidy (later to become a founding member of the band Spirit, with Randy), moved to New York City in the summer of 1966 because Cassidy had a number of jazz gigs lined up. It was there, at Manny's Guitars, that Randy met Jimi Hendrix.[3] He played in Hendrix's band Jimmy James and the Blue Flames that summer. California, Cassidy and Pearl lived in an apartment building in Forest Hills (Queens), New York called the Balfour, whose other residents included future Steely Dan co-founder Walter Becker, who cited California's blues-based guitar style as an influence on his own playing.[4]

The stage name "Randy California" was given to him by Hendrix to distinguish him from another Randy in the band, Randy Palmer, whom Hendrix dubbed "Randy Texas".[1] When Hendrix and California were invited to come to England by Chas Chandler, former bassist of British Invasion band the Animals—who became Hendrix's manager and producer—Randy's parents refused to allow him to go, insisting the 15-year-old stay and finish high school.[5] By some accounts, Chandler wanted Hendrix as the only guitarist for the band and nixed California's going to England.

Together with Cassidy, songwriter/front-man Jay Ferguson, bassist Mark Andes (with whom California and Cassidy initially had formed a band called the Red Roosters) and keyboardist John Locke, California founded the band Spirit.

Their first, self-titled, album was released in January 1968, a month before California's 17th birthday. He then wrote the band's biggest hit, 1968's "I Got a Line on You" for Spirit's second album, The Family That Plays Together. He also wrote the single "1984", released in early 1970 and banned from most AM radio stations at that time. He also penned Spirit's other hit, "Nature's Way", for the band's best-selling album, Twelve Dreams of Dr. Sardonicus. Christopher Cross covered "Nature's Way" on his 1994 album "Windows."

In writing Led Zeppelin's "Stairway to Heaven", Jimmy Page may have been reworking California's guitar riff from "Taurus", an instrumental song from the first Spirit album. Led Zeppelin was on the same bill as Spirit on two American music festival dates in 1969.[6] In the liner notes for the 1996 reissue of Spirit's first album, California stated: "people always ask me why 'Stairway to Heaven' sounds exactly like 'Taurus,' which was released two years earlier. I know Led Zeppelin also played 'Fresh Garbage' in their live set. They opened up for us on their first American tour". The fact that "Fresh Garbage" was a track from the same album that includes the song "Taurus" further fueled the belief that Led Zeppelin was at least aware of the song. In 2014, a copyright infringement and injunction lawsuit against the reissue of Led Zeppelin IV started with the lawyer saying, "The idea behind this is to make sure that Randy California is given a writing credit on Stairway to Heaven."[7][8] In Led Zeppelin's January 1969 appearance at the Fiillmore West, Jimmy Page breaks into an instrumental jam which clearly includes the Spirit song "Fresh Garbage."

In June 2016, after a trial that included audio recordings of several versions of both songs but not the Spirit and Led Zeppelin recordings, and also featured testimony from Page and bandmate Robert Plant explaining the songwriting process for "Stairway," a jury ruled that Page and Plant had not copied "Taurus." [9] The decision is under appeal because the judge did not permit the two sound recordings to be played and instead allowed only sheet music. Copyright law was expanded to include sound recordings in 1974.

Spirit was invited to open for Jimi Hendrix at Woodstock.[10] However, band manager/producer Lou Adler—who had been one of the founders of the rock festival movement two years earlier, as a partner (with Mamas & Papas lynchpin John Phillips) in the Monterey Pop Festival, where Hendrix premiered in the U.S.—opposed it because the band was busy promoting their latest album, Clear.

When Ferguson and Andes left Spirit to form Jo Jo Gunne due to the slow sales of Sardonicus, and then his dear friend Hendrix died, a depressed California left Spirit. He recorded Kapt. Kopter & The Fabulous Twirly Birds, which included California and Cassidy's version of Paul Simon's "Mother and Child Reunion" plus a slew of authentically Hendrix-like tracks (also featuring former Experience bassist Noel Redding, AKA 'Clit McTorius'). In 1972 the album was released at virtually the same moment as Jo Jo Gunne's first, eponymous album that featured "Run, Run Run" and a Spirit album called Feedback that was recorded by Cassidy and Locke (who were Spirit's jazz influences) and guitarist/bassist brother duo Al and John Staehely, who wrote and sang most of the material on the LP.

California's second solo album, Euro-American, was released in 1982 by Beggar's Banquet featuring a line up including British Drummer Preston Heyman and he headed the bill with Heyman at 1982 Glastonbury Festival, much of the footage from which can be found on YouTube, including a performance of the Bob Dylan classic song "Like a Rolling Stone". At this concert the power generator failed, it was said because the operator had fallen asleep stoned and neglected to refill the fuel - forcing Drummer Preston Heyman to perform a 20-minute un-amplified solo with the audience accompanying banging beer cans and chanting while the situation was rectified.[11] He would release two more solo albums during the decade.

In December 1982, the original Spirit line-up re-formed and recorded several songs from their first four albums (as well as a few new tracks) live on a soundstage. Though the album Spirit of '84 was initially recorded for an audiophile label, Mercury Records re-signed the band (and gave California a solo deal) and released the album in 1984. The album was only a moderate success. Some of the original members went to do other projects, but California and Cassidy continued touring with new members Scott Monahan on keyboards and Dave Waterbury on bass.

California headed to England and recorded his third solo album, the contemporary hard rock Restless for which his friend British Drummer Preston Heyman (who played on the track "Jack Rabbit") secured a deal with Phonogram for in late 1985. Following a few live dates in England, California returned to the United States and resumed touring extensively with Cassidy, Monahan, and Waterbury. There was one more solo album from California: a collection of material entitled Shattered Dreams that was released in 1986.

California drowned in the Pacific Ocean in 1997 at the age of 45 while rescuing his 12-year-old son Quinn from a rip current near the home of his mother, Bernice Pearl, at Molokai, Hawaii. He managed to push Quinn (who survived) toward the shore.[12]

This article uses material from the article Randy California from the free encyclopedia Wikipedia and it is licensed under the GNU Free Documentation License.

Beef Jerky Bruce Katz Band
Update Required To play the media you will need to either update your browser to a recent version or update your Flash plugin.