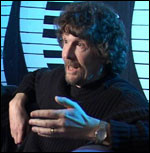 Rodney Terence "Rod" Argent (born 14 June 1945) is an English musician, singer, songwriter, composer, and record producer. In a career spanning more than 50 years, Argent came to prominence in the mid 1960s as the founder and keyboardist of the English rock band The Zombies,[1] and went on to form the band Argent after the first break-up of The Zombies.[2]

Argent is one of the main composers of The Zombies' music and made major lyrical contributions to the band's songs. As the band's keyboardist he used a variety of instruments, including the Mellotron, the harpsichord, and the organ.

In addition to his work with the Zombies and Argent, Argent has made music for television series, been a session musician, produced albums by other artists, and has had a solo career which has included three studio albums: "Moving Home", "Red House", and "Classically Speaking".

As a child, Argent sang as a chorister in the St Albans Cathedral Choir.[3] While at St Albans School, he met Paul Atkinson and Hugh Grundy. Argent, Atkinson, and Grundy first played together at a jam on Easter 1961 in St Albans, Hertfordshire.

Argent wanted to form a band and initially asked his cousin Jim Rodford to join as a bass guitarist. Rodford was playing in local band called the Bluetones at the time, so declined. Colin Blunstone and Paul Arnold joined the new band in early 1961, while all five members were still at school. Arnold left not long after and was replaced by Chris White. After the band won a local contest, they recorded a demo as their prize. Argent's song "She's Not There" got them a recording contract with Decca.[4]

In addition to playing the piano and keyboards in The Zombies, Argent was (with White) one of the group's two main songwriters, penning the hits "She's Not There", "Tell Her No", and "Time of the Season", amongst others. Argent was initially the group's lead singer, with Blunstone on guitar. When Argent's keyboard talents became apparent, he became the group's full-time keyboard player, conceding the role of lead singer to Blunstone. The group continued to record through the 1960s, but disbanded in December 1967, reportedly over management disagreements.[5]

After the band broke up, Argent went on to form the band Argent, which had a hit album in 1972 with All Together Now, which contained the single "Hold Your Head Up". His Hammond B3 solo on that track is cited by Rick Wakeman as the greatest organ solo ever.[6] The band also recorded the original version of the rock anthem "God Gave Rock and Roll to You", written by lead singer Russ Ballard, which was later covered by other artists including Petra and Kiss. Argent's first album included the song "Liar" (also composed by Ballard), which became a hit for Three Dog Night. In 1976, the band broke up.[7]

In 1978, Argent released his debut solo album Moving Home with many well-known musicians, including Genesis drummer Phil Collins, and Weather Report bass guitarist Alphonso Johnson. In 1980, he wrote a musical titled Masquerade which premiered in London in 1982. In 1988, he issued another solo album, Red House.[8]

Argent went on to play keyboards with a number of musicians, including piano on the title track of The Who's album Who Are You, and on Variations with Gary Moore, Julian Lloyd Webber, and Andrew Lloyd Webber. In the 1980s he began writing for television. In 1986, he composed the theme music for ITV's coverage of the 1986 FIFA World Cup, "Aztec Gold", which was released as a single under the title of "Silsoe". Also in 1986, he composed the theme music for ITV's The Two of Us. Two years later, the Argent/Van Hooke composition "Goal Crazy" was used by ITV's The Big Match from 1988 until 1992. Argent also composed the theme music to the ITV (LWT) sitcom The Piglet Files, which aired from 1990 to 1992.[8]

In 1999, Argent recorded a solo piano album, Rod Argent Classically Speaking, in which he played Chopin études and music by Ravel, Bach, and Grieg, as well as three of his own compositions.[9] In 2006, Argent joined Hamish Stuart, Richard Marx, Billy Squier, Edgar Winter and Sheila E. to tour with Ringo Starr & His All-Starr Band.[10]

In 2004, Argent and Colin Blunstone recorded a new album, As Far as I Can See..., in the style of The Zombies. A subsequent album and DVD Colin Blunstone & Rod Argent of the Zombies Live at the Bloomsbury Theatre received favourable reviews,[11][12] as did their 2007 US tour. One critic noted, "The Zombies, still led by original keyboard wizard Rod Argent and featuring the smoked-silk vocals of Colin Blunstone, is the best 60s band still touring which doesn't have Mick Jagger as a front man".[13]

Argent continued to tour with Colin Blunstone as The Zombies, and in April 2009 the original surviving members of the band played four reunion concerts performing the album Odessey and Oracle. This led to a band reunion. In a 2015 interview with PopMatters journalist J.C. Maçek III about the Zombies' latest album Still Got That Hunger, Argent said "Still Got That Hunger is the first album that has really recaptured some of the resonance of feeling of a group. We're so tight as a group together now. And the whole process has become so organic that we're 100% happy with the Zombies name and rediscovering and playing all the old stuff and at the same time carving a new path forward which is also very, very important to us."[14]

In 2012, Argent participated in the unveiling of a Blue Plaque at The Blacksmith's Arms, a pub in St Albans where the Zombies met for their first rehearsal.[15]

This article uses material from the article Rod Argent from the free encyclopedia Wikipedia and it is licensed under the GNU Free Documentation License.

Anémone soufrée Jörg Schneider
Update Required To play the media you will need to either update your browser to a recent version or update your Flash plugin.