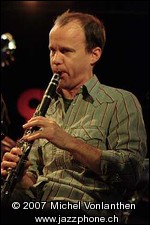 Chris Speed (b. Seattle, Washington, 1967) is an American saxophonist, clarinetist, and composer. [1]

He studied classical piano from the age of five, and began clarinet at eleven. In high school he took up the tenor saxophone and began studying jazz. He later attended the New England Conservatory of Music in Boston.

Chris Speed performed on the Grammy-nominated album A Blessing, by the John Hollenbeck Large Ensemble; and with Pachora contributed the track "Tirzah" to the Masada tribute album Voices in the Wilderness.

He has also performed and/or recorded with Myra Melford, Mark Dresser, Susie Ibarra, Erik Friedlander, Satoko Fujii, Hank Roberts, and Dave Douglas. He has appeared on about 70-80 recordings since 1990.

In 2006, Speed helped create Skirl Records, an independent record label that is described as "an artist-run collective documenting work by a Brooklyn-centered community of musicians channeling a vast array of ideas and experience into new music." Speed appeared on two of Skirl's initial releases (The Clarinets' self-titled disc and Curtis Hasselbring's The New Mellow Edwards).

This article uses material from the article Chris Speed from the free encyclopedia Wikipedia and it is licensed under the GNU Free Documentation License.