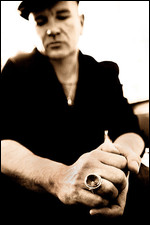 Friday was born in Dublin and grew up in Ballygall a neighbourhood located on Dublin's Northside located between Finglas and Glasnevin where he went to school.[1] When he was fourteen years old and living on Cedarwood Road, he met Bono and Guggi at a party to which he had not been invited. Bono said: We caught him trying to steal something of the house. Classic teenage stuff... but we became friends.[2]

He was a founding member of the post-punk group The Virgin Prunes[3] and has recorded several solo albums and soundtracks.

In 1986, after the demise of Virgin Prunes, Friday devoted himself to painting for a while, sharing a studio with Bono, Guggi and Charlie Whisker. This resulted in the exhibition Four Artists - Many Wednesdays (1988) at Dublins Hendricks Gallery. Friday, Guggi and Whisker showed paintings, while Bono opted to exhibit photos taken in Ethiopia. Friday's part of the show was entitled I didn't come up the Liffey in a bubble, an expression often used by Friday's father.[4][5]

His main collaborator between 1987 and 2005 was multi-instrumentalist, Maurice Seezer. They signed to Island Records in 1988 and released three albums together, before parting with the company in 1996.[6] Since then Friday and Seezer composed the score for the Jim Sheridan films The Boxer and In America which was nominated for Best Original Film Score in the 2004 Ivor Novello Awards.[7]

He has maintained a close friendship with U2's Bono[8] since both were children, and they collaborated on the soundtrack for the Jim Sheridan's film In the Name of the Father, including the title track, "Billy Boola" and "You made me the thief of your heart", which was sung by Sinéad O'Connor and nominated for a Golden Globe for Best Original Song.[9] In 2003 they wrote "Time Enough for Tears", the original theme tune for Sheridan's film In America, as sung by Andrea Corr.[10] The song was nominated for a Golden Globe Award for Best Original Song.[11]

In 1995 he performed "Look What You've Done (To My Skin)," one of two songs (the other sung by P.J. Harvey) written by Philip Ridley and Nick Bicat for Ridley's second feature film as writer and director, The Passion of Darkly Noon.[12]

In September 2006 a 2-CD collection of sea shanties called Rogue's Gallery: Pirate Ballads, Sea Songs, and Chanteys, produced by Hal Willner, was released on the ANTI- label.[16] Friday contributes to two tracks including the lewd "Baltimore Whores" and "Bully in the Alley" with ex-Virgin Prunes bandmates Guggi and Dave-id. The reunion of Friday, Guggi and Dave-id was the first time they had recorded together since the Virgin Prunes broke up in 1985.[17]

Friday worked again with Hal Willner in June 2007, appearing in the concert "Forest of No Return - the Vintage Disney Songbook" as part of the Meltdown Festival presented at London's newly reopened Royal Festival Hall. Sharing a stage with artists such as Grace Jones, Nick Cave, Pete Doherty and curator Jarvis Cocker, Friday performed the classic Disney tracks "The Siamese Cat Song" and "Castle In Spain".[18]

Taking time out from work on his fourth solo album with Herb Macken, Friday teamed up with English composer, Gavin Bryars, the Royal Shakespeare Company and Opera North for a new interpretation of Shakespeare's Sonnets touring as part of the 2007 Complete Works Festival. Opening in Stratford-Upon-Avon, Friday presented his take on Sonnet 40 ('Take all my loves, my love, yea, take them all') and narrated Bryars' 40-minute piece 'Nothing Like The Sun'.[19] Friday and Macken composed the music for the Patrick McCabe play, The Revenant.[20] The Revenant opened as part of the 2007 Galway Arts Festival. The play's main theme is entitled 'Dreamland'.[21]

Friday's first acting experience was in the Kirsten Sheridan film Disco Pigs (2001), in which he played a bit part.[25]

In 2005 Gavin Friday played Billy Hatchett in the Neil Jordan film Breakfast on Pluto based on Irish author Patrick McCabe's book, which had been influenced by Friday's album Shag Tobacco.[26] On the soundtrack he sings "Wig Wam Bam" and "Sand", a duet with Cillian Murphy.

In 1983 Friday appeared on the title track of Dave Ball's In Strict Tempo.[27]

In 1984, Friday collaborated with cult English post-punk group The Fall, on three tracks: "Copped It" and "Stephen Song" appeared on the album The Wonderful and Frightening World of The Fall, and "Clear Off!" was a track on the "Call For Escape Route" EP. On all three tracks, Friday and Fall singer Mark E. Smith alternated vocals, occasionally backing each other up. In the same year Friday provided vocals for the track "The Tenderness of Wolves" on the album Scatology by Coil.[28]

Twelve years later, Friday collaborated with The Heads (former members of the Talking Heads minus David Byrne) on a song called "Blue Blue Moon." This was included as the last of 12 tracks on The Heads' 1996 album No Talking, Just Head. The song is credited to Gavin Friday, Chris Frantz, Jerry Harrison, T. "Blast" Murray and Tina Weymouth.

In 2011, he contributed a cover version of "The Fly" to AHK-toong BAY-bi Covered, a tribute album to U2s Achtung Baby.[29]

This article uses material from the article Gavin Friday from the free encyclopedia Wikipedia and it is licensed under the GNU Free Documentation License.