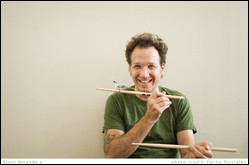 Scott Amendola (born February 6, 1969) is an American drummer from the San Francisco Bay Area. His styles include jazz, blues, groove, rock and new music.[1] He is considered central to the Bay Area music scene.[2]

Amendola was originally from New Jersey and studied at Berklee School of Music in Boston.[3] After relocating to the San Francisco Bay Area he came to popularity in the 1990s as a member of T.J. Kirk with Charlie Hunter, Will Bernard and John Schott. Their second album received a Grammy Award nomination.[4] He has led his own bands and trios which have included Nels Cline, Jenny Scheinman, Jeff Parker and John Shifflett[5] as well as Ben Goldberg and Devin Hoff.[1] Often favoring guitarists he has toured with Bill Frisell and Kelly Joe Phelps and recorded with Pat Martino, Jim Campilongo, G.E. Stinson, Nels Cline and Tony Furtado. He is an original member of the Larry Ochs Sax & Drumming Core. He has been a session percussionist for Noe Venable, Carla Bozulich and Odessa Chen.[6]

In 2011 Amendola will have his new orchestral work performed in conjunction with the Oakland East Bay Symphony as one the symphony's New Visions/New Vistas premieres. Amendola will be joined by Nels Cline and Trevor Dunn.[7]

With The Nels Cline Singers

This article uses material from the article Scott Amendola from the free encyclopedia Wikipedia and it is licensed under the GNU Free Documentation License.

Blue Horizon Riviera Jazz Connection
Update Required To play the media you will need to either update your browser to a recent version or update your Flash plugin.