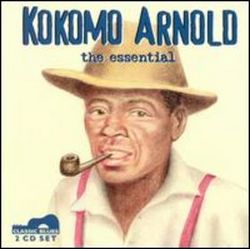 Born as James Arnold in Lovejoy's Station, Georgia, he got his nickname in 1934 after releasing "Old Original Kokomo Blues" for the Decca label; it was a cover of the Scrapper Blackwell blues song about the city of Kokomo, Indiana.[1] A left-handed slide guitarist, his intense slide style of playing and rapid-fire vocal style set him apart from his contemporaries.

Having learned the basics of the guitar from his cousin, John Wiggs,[2] Arnold began playing in the early 1920s as a sideline while he worked as a farmhand in Buffalo, New York, and as a steelworker in Pittsburgh, Pennsylvania. In 1929 he moved to Chicago and set up a bootlegging business, an activity he continued throughout Prohibition. In 1930 Arnold moved south briefly, and made his first recordings, "Rainy Night Blues" and "Paddlin' Madeline Blues", under the name Gitfiddle Jim for the Victor label in Memphis.[3] He soon moved back to Chicago, although he was forced to make a living as a musician after Prohibition ended in 1933. Kansas Joe McCoy heard him and introduced him to Mayo Williams who was producing records for Decca.[2]

From his first recording for Decca on September 10, 1934, until his last on May 12, 1938, Arnold made 88 sides, seven of which remain lost. Arnold, Peetie Wheatstraw and Bumble Bee Slim were dominant figures in Chicago blues circles of that time. Peetie Wheatstraw & Arnold in particular were also major influences upon musical contemporary seminal delta blues artist Robert Johnson and thus modern music as a whole. Johnson turned "Old Original Kokomo Blues" into "Sweet Home Chicago", "Milk Cow Blues" into "Milkcow's Calf Blues", while another Arnold song, "Sagefield Woman Blues", introduced the terminology "dust my broom", which Johnson used as a song title himself.

In 1938 Arnold left the music industry and began to work in a Chicago factory.[3] Rediscovered by blues researchers in 1962, he showed no enthusiasm for returning to music to take advantage of the new explosion of interest in the blues among young white audiences.[3]

This article uses material from the article Kokomo Arnold from the free encyclopedia Wikipedia and it is licensed under the GNU Free Documentation License.

Zingaro (Retrato em branco y Preto) Virginie Teychené
Update Required To play the media you will need to either update your browser to a recent version or update your Flash plugin.