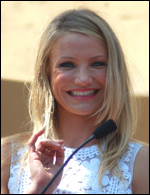 Cameron Michelle Diaz (born August 30, 1972) is an American actress and former model. She rose to prominence during the 1990s with roles in the movies The Mask, My Best Friend's Wedding and There's Something About Mary. Other high-profile credits include the two Charlie's Angels films, voicing the character Princess Fiona in the Shrek series, Any Given Sunday, Knight and Day, The Holiday, The Green Hornet and Bad Teacher.

Diaz has received four Golden Globe Award nominations for her performances in the movies, Being John Malkovich, Vanilla Sky, Gangs of New York, and There's Something About Mary for which she also won the New York Film Critics Best Lead Actress Award. She is also a BAFTA Nominee. In 2013, Diaz was named the highest paid actress over 40 in Hollywood.[3]

Cameron Diaz was born in San Diego, California. Her mother, Billie Joann (née Early), is an import-export agent, and her father, Emilio Luis Diaz (1949-2008), worked for the California oil company UNOCAL for more than 20 years as a field gauger.[4][5] Diaz has an older sister, Chimene. Her father's family were Cuban (of Spanish descent), and settled in Tampa's Ybor City, later moving to California, where Emilio was born.[6][7] Her mother has English, German, and Scots-Irish ancestry.[8][9][10] Diaz was raised in Long Beach, California, and attended Long Beach Polytechnic High School.[11][12]

She began her career as a fashion model at age 16, and contracted with a modeling agency, Elite Model Management. For the next few years she worked around the world on contracts for companies such as Calvin Klein and Levi's.[13] When she was age 17 she was featured on the front cover of the July 1990 issue of Seventeen.[14]

At age 21, Diaz auditioned for The Mask,[15] based on the recommendation of an agent for Elite, who met the film's producers while they were searching for the female main actress. Having no previous acting experience, she started acting lessons after being cast. The Mask became one of the top ten highest grossing films of 1994.[16] and launched Diaz as a sex symbol.[17][18]

Preferring to feel her way effectively into the industry, Diaz avoided large studio films for the next three years and took roles in the independent films The Last Supper (1995), Feeling Minnesota (1996), She's the One (1996), and Head Above Water (1996). She was scheduled to perform in the film Mortal Kombat, but had to resign after breaking her hand while training for the role.[19] During this time she earned considerable tabloid fame for being actor Matt Dillon's steady date, 1995 through 1998. Diaz returned to mainstream films with My Best Friend's Wedding and A Life Less Ordinary, both released in 1997. The following year, she played the title role in the smash hit There's Something About Mary (1998), for which she was nominated for a Golden Globe Award for the category of Best Actress  Musical or Comedy.[13]

She received critical acclaim for her performance in Being John Malkovich (1999), which earned her Best Supporting Actress nominations at the Golden Globe, BAFTA, and SAG Awards.

Between 1998 and 2000, Diaz was featured in many movies, such as Things You Can Tell Just by Looking at Her, Very Bad Things, Any Given Sunday, and the successful adaptation of Charlie's Angels.[13] In 2001, she won nominations for Best Supporting Actress for the Golden Globe Awards, the SAG Awards, the Critics' Choice Awards, and the American Film Institute Awards for Vanilla Sky, and also voiced Princess Fiona in the movie Shrek,[13] for which she earned $10 million.

In 2003, Diaz received another Golden Globe nomination for Martin Scorsese's 2002 epic Gangs of New York, and became the third actress (after Wedding costar Julia Roberts) to earn $20 million for a role, receiving the sum for Charlie's Angels: Full Throttle. Her next movies were In Her Shoes (2005) and The Holiday (2006). She was preparing to work again with The Mask co-star Jim Carrey for the film Fun with Dick and Jane, but resigned to feature in In Her Shoes. Diaz reportedly earned $50 million during the period of a year ending June 2008, for her roles in What Happens in Vegas opposite Ashton Kutcher, and the Shrek sequels.[20][21][22] In 2009, she starred in My Sister's Keeper and The Box.

In 2010, Forbes Magazine ranked Cameron Diaz as the richest Hispanic female celebrity, ranking number 60 among the wealthiest 100.[23][24] Also that year, Diaz voiced Princess Fiona for the movie Shrek Forever After, and reunited with her Vanilla Sky co-star Tom Cruise in the action adventure Knight and Day.

In 2011, she played Lenore Case, the journalist in the remake of the 1940s film The Green Hornet, and was the central lead in the hit comedy Bad Teacher. She was listed among CEOWORLD magazine's Top Accomplished Women Entertainers.[25] Diaz will play Miss Hannigan in a new film adaptation of the musical, Annie.[26]

Diaz received substantial defamation damages from suing American Media Incorporated, after The National Enquirer had claimed she was cheating on Justin Timberlake.[27] She endorsed Al Gore publicly during 2000. Diaz wore a t-shirt that read "I won't vote for a son of a Bush!" while making publicity visits for Charlie's Angels.[28] Diaz has also been involved with the Iraq and Afghanistan Veterans of America (IAVA), the first and largest nonprofit organization for veterans of the wars in Iraq and Afghanistan, and has spoken as an advocate for military families.[29] Although she was quoted by a 1997 Time magazine article as saying she was germophobic,[30] Diaz specifically denied this on the June 26, 2009, edition of Real Time with Bill Maher, saying that a small comment she made twelve years earlier regarding public bathroom doorknobs was distorted out of proportion.[31]

From 1990 to December 1994, Diaz cohabited with video producer Carlos de la Torre.[33][34] In 1995, Diaz dated actor Vincent D'Onofrio during the production of Feeling Minnesota.[34] Later in 1995, she began a relationship with actor Matt Dillon. The relationship ended in December 1998.[35] She began dating actor and member of Thirty Seconds to Mars Jared Leto in 1999, and the couple became engaged in 2000.[36] In 2003, they ended their four-year relationship.[37] Diaz dated singer Justin Timberlake from 2003 to 2006.[35] In October 2004, Diaz and Timberlake were in an altercation with a tabloid photographer outside a hotel. When the photographer and another man tried to photograph them, the couple snatched the camera. Pictures of the incident appeared in Us Weekly. Representatives for the pair claimed that they were acting a scene on a set.[38] Diaz was in a romantic relationship with New York Yankees baseball star Alex Rodriguez from July 2010 to September 2011.[39]

This article uses material from the article Cameron Diaz from the free encyclopedia Wikipedia and it is licensed under the GNU Free Documentation License.