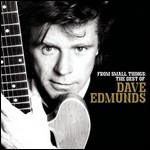 David 'Dave' Edmunds (born 15 April 1944, Cardiff, Glamorgan, South Wales) is a Welsh singer, guitarist and record producer. Although he is primarily associated with Pub rock and New Wave, and had numerous hits in the 1970s and early 1980s, his natural leaning has always been towards 1950s style rock and roll.[1]

As a teenager Edmunds first played with a band called the '99ers' and later in the 'Heartbeats' with his older brother Geoff.[2] The first group that Edmunds fronted was the Cardiff based 1950s style rockabilly trio 'The Raiders', along with Bob 'Congo' Jones on drums and John Williams (stage name John David) on bass, that worked almost exclusively in the South Wales area. In the late 1960s, after a short spell in Parlophone recording band 'Image' with local drummer Tommy Riley, Edmunds shifted to a more blues-rock sound, reuniting with Congo Jones and bassist John Williams and adding second guitarist Mickey Gee to form the short lived 'The Human Beans',[3] a band that played mostly in London and on the UK university circuit. In 1967 the band recorded a cover of "Morning Dew" on the Columbia label,[4] that failed to have any chart impact. After just eighteen months the core of 'Human Beans' formed a new band called Love Sculpture that again reinstated Edmunds, Jones and Williams as a trio, who scored a quasi-novelty Top 5 hit by reworking Khachaturian's classical piece "Sabre Dance" as a speed-crazed rock number, inspired by Keith Emerson's classical rearrangements.[5] "Sabre Dance" became a hit after garnering the enthusiastic attention of British DJ John Peel.[5]

After Love Sculpture split, Edmunds had a UK Christmas Number 1 single in 1970 with "I Hear You Knocking",[6] a Smiley Lewis cover, which he came across while producing Shakin' Stevens and the Sunsets' first album entitled A Legend. The recording was the first release on Edmunds's manager's MAM Records label. This single also reached #4 in the U.S., making it Edmunds's biggest hit by far on either side of the Pond. It sold over three million copies, and was awarded a gold disc.[7] Edmunds had intended to record Wilbert Harrison's "Let's Work Together", but when he was beaten to that song by Canned Heat, he adapted the arrangement he intended to use for it to "I Hear You Knocking", producing a highly original remake. Unfortunately, the success of the single caused EMI's Regal Zonophone Records to use an option that it had to claim Edmunds's album, 1972's Rockpile, and the momentum from the single's success on a different label went away.

Edmunds's only acting role followed, as a band member in the David Essex movie, Stardust.[8] After learning the trade of producer, culminating in a couple of singles in the style of Phil Spector, "Baby I Love You" and "Born to Be with You", he became linked with the pub rock movement of the early 1970s, producing Brinsley Schwarz, Ducks Deluxe, and also The Flamin' Groovies, using a stripped down, grittier sound. Edmunds had bought a house in Rockfield, Monmouth a few miles away from Charles and Kingsley Ward's Rockfield Studios where he became an almost permanent fixture for the next twenty years. His working regime involved arriving at the studio in the early evening and working through till well after dawn, usually locked in the building alone. Applying the layered Spector sound to his own productions it was not unusual for Edmunds to multilayer up to forty separately recorded guitar tracks into the mix.

Rockpile and other collaborations

His own solo LP from 1975, Subtle as a Flying Mallet, was similar in style. The Brinsley Schwarz connection brought about a collaboration with Nick Lowe starting with this album, and in 1976 they formed the group Rockpile, with Billy Bremner and Terry Williams. Because Edmunds and Lowe signed to different record labels that year, they could not record as Rockpile until 1980, but many of their solo LPs (such as Nick Lowe's Labour of Lust and Edmunds's own Repeat When Necessary) were group recordings. Edmunds had more UK hits during this time, including Elvis Costello's "Girls Talk", Nick Lowe's "I Knew The Bride", Hank DeVito's "Queen of Hearts" (written for Edmunds and later a U.S. hit for Juice Newton), Graham Parker's "Crawling from the Wreckage", and Melvin Endsley's "Singing the Blues" (originally a hit for Marty Robbins).

Unexpectedly, after Rockpile released their first LP under their own name, Seconds of Pleasure (1980), the band split, generally attributed to tensions not between Edmunds and Lowe but their respective managers. Edmonds and the band, including Nick Lowe, performed in a music video for the track, ""Girls Talk" directed by Martin Pitts, and produced by Derek Burbidge and Helen Pollack. For the video the band set up on the roof of the Warner Brothers Records building in Mid-Town Manhattan in the early afternoon causing a stir in offices in Rockefeller Center. Edmunds spent the 1980s collaborating with and producing an assortment of artists, from Paul McCartney to King Kurt, and from Stray Cats and Fabulous Thunderbirds to Status Quo. He recorded the soundtrack for Porky's Revenge, supplying the main theme, "High School Nights," and was the musical director for a television special starring Carl Perkins, with assorted guests including George Harrison, Ringo Starr, and Rosanne Cash.

On his 1983 release, Information, Edmunds collaborated on two songs with Jeff Lynne, the leader of Electric Light Orchestra. One of these songs, a Lynne composition, "Slipping Away", became Edmunds's only other U.S. Top 40 hit, albeit just barely, spending a single week at #39 while having a video clip in heavy rotation on MTV. It was not a hit in the UK. In 1984, Lynne produced six tracks on Edmunds's following album, Riff Raff.

In 1986, Dave Edmunds participated in Carl Perkins's Rockabilly Session television special to pay tribute to his hero. Other musicians involved in the project include George Harrison, Ringo Starr, and Eric Clapton.

Edmunds recorded less frequently after the mid 1980s, living in Wales in semi-retirement, but occasionally touring. He joined up with Ringo Starr & His All-Starr Band for tours in 1992 and 2000.[9] However, 2007 marked a return to touring for Edmunds, alongside Joe Brown, on a lengthy tour around the UK. He made an appearance on stage alongside Stray Cats, at the Brixton Academy in London, on 10 September 2008, playing "The Race Is On" and "Tear It Up" with the band.[10]

In 1993 Edmunds unexpectedly found himself in Cardiff Crown Court as a co-defendant along with Shakin' Stevens facing charges of non-payment of playing royalties from former Sunsets' band members Robert Llewellyn, Carl Petersen, Steve Percy and Paul Dolan. The prosecution asserted that the former band members were due a share of those additional royalties that Stevens and Edmunds had received from the successful reissue of the album A Legend during the early eighties. The judge agreed and, while the unpaid royalties only amounted to around £70,000 to be divided between the four musicians, the associated court costs to be paid by Stevens and Edmunds amounted to £500,000. .[11]

On New Year's Eve 2008 he appeared on Jools Holland's annual Hootenanny, performing "Girls Talk" and "I Hear You Knocking". He was Holland's guest again at Borde Hill Garden on 20 June 2009, on 28 August at open air concert at Carrickfergus Castle.[12], 31 October at Ipswich Regent, 7 November at Stoke Victoria Hall and 14 November at Nottingham Concert Hall. Edmunds also played a five song set, including "I Hear You Knocking," "I Knew the Bride" and "Sabre Dance" with the Holland Big Band at the Royal Albert Hall on 27 November 2009.

He returned and performed Sabre Dance on Hootenanny on the 2009/10 edition.

1968 Wang Dang Doodle With Love Sculpture (side b) The Stumble

This article uses material from the article Dave Edmunds from the free encyclopedia Wikipedia and it is licensed under the GNU Free Documentation License.

Cool Man Frank Salis H30
Update Required To play the media you will need to either update your browser to a recent version or update your Flash plugin.