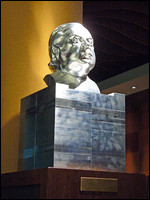 Born in Istanbul, Turkey, Nesuhi and his family, including younger brother Ahmet, moved to Washington, D.C. in 1935 with their father Münir Ertegün, who was appointed the Turkish Ambassador to the United States in that year.

From an early age, Nesuhis primary musical interest was jazz. He had attended concerts in Europe before his family moved to the USA. While living at the Turkish Embassy in Washington D.C., he promoted jazz concerts during 1941-44.

When his father died in 1944, and most of the rest of his family returned to Turkey, Nesuhi decided to stay in the USA and moved to California. He married Jazz Man Record Shop owner Marili Morden and helped run the shop as well as establishing the Crescent record label. After purchasing Jazz Man Records, he discontinued Crescent and issued traditional jazz recordings on Jazz Man until 1952. At Jazz Man, Nesuhi produced classic Kid Ory revival recordings in 1944 and 1945 plus other recordings by Pete Daily and Turk Murphy. For details on this seminal period in Ertegun's career, see Cary Ginell's "Hot Jazz for Sale: Hollywood's Jazz Man Record Shop."

Although his main interest was initially New Orleans jazz, which he also wrote about while serving as the editor of Record Changer magazine, Ertegün was open to more modern styles. He sold the Jazz Man label in 1952 to Lester Koenig and then went to work for Koenig at Contemporary Records/Good Time Jazz Records. While there, on Koenig's recommendation, he was engaged to teach the first history of jazz course ever given for academic credit at a major American university at UCLA.

In 1955, he was preparing to work for Imperial Records to develop their jazz record line and develop a catalog of LPs. However, Ahmet Ertegün and Jerry Wexler persuaded him instead to join their company, Atlantic Records, where he was made a partner.[1] He became vice-president in charge of the jazz and LP department at Atlantic, building up the labels extensive catalog of jazz LPs. He was responsible for investing in the album market, improving the quality of recordings and sleeve formats.

As a producer at Atlantic he worked with John Coltrane, Charles Mingus, Ornette Coleman, whom Lester Koenig had previously recorded at Contemporary, the Modern Jazz Quartet and many others. Nesuhi also became involved with the labels rhythm & blues and rock and roll roster, first recruiting songwriters and producers Leiber and Stoller, with whom he had worked in California, and producing several hit records for Ray Charles, Chris Connor, the Drifters, Bobby Darin and Roberta Flack.

With Ahmet, he also co-founded the New York Cosmos soccer team of the North American Soccer League. They were instrumental in bringing in soccer legends like Giorgio Chinaglia, Pelé, Carlos Alberto and Franz Beckenbauer to the club.

In 1971, Nesuhi founded WEA International, now Warner Music International. While at WEA International, Nesuhi demonstrated tremendous independence and character, often going against the wishes of his U.S. counterparts. In the 1980s Neshui released the single "Girls, Girls, Girls" by then unknown Latin-American rockers Renegade forcing a domestic release of their debut album Rock N' Roll Crazy!. The domestic label had demanded the band members change their names to "less ethnic" sounding names. Nesuhi was incensed by the demand, and set out to break the record and the act internationally with the band's given names. He remained head of the Warner Records International Division until he retired in 1987.

He died on July 15, 1989, at the age of 71, due to complications following cancer surgery at the Mount Sinai Medical Center in New York City.

Nesuhi was an avid collector of Surrealist art. His collection (along with that of his friend's, Daniel Filipacchi) was exhibited at the Guggenheim in New York in 1999 in Surrealism: Two Private Eyes, the Nesuhi Ertegun and Daniel Filipacchi Collections--an event described by The New York Times as: a gourmet banquet, large enough to pack the Solomon R. Guggenheim Museum from ceiling to lobby with a powerful exhibition. [1]

This article uses material from the article Nesuhi Ertegun from the free encyclopedia Wikipedia and it is licensed under the GNU Free Documentation License.

Romance In The Dark Nicole Herzog & Stewy von Wattenwyl Group
Update Required To play the media you will need to either update your browser to a recent version or update your Flash plugin.