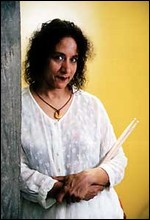 Marilyn Mazur (born January 18, 1955) is a percussionist, drummer, composer, vocalist, pianist, dancer and bandleader. She was born in New York and has lived in Denmark from age six. She is of Polish and African-American descent. Since 1975, she has worked as a percussionist with various groups, among them Six Winds with Alex Riel. Mazur is primarily an autodidact, but she has a degree in percussion from the Royal Danish Academy of Music.

This article uses material from the article Marilyn Mazur from the free encyclopedia Wikipedia and it is licensed under the GNU Free Documentation License.