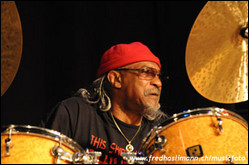 Jackson was born in Fort Worth, Texas,[1] where he attended I.M. Terrell High School.[2][3] He is notable for his unusual approach to his instrument, which draws as much inspiration from military and parade bands as traditional jazz drumming. He is the only person to have recorded and performed with the three prime shapers of free jazz: pianist Cecil Taylor, and saxophonists Ornette Coleman and Albert Ayler.

In 1979, he founded his own group, the Decoding Society,[1] playing what has been dubbed free funk: a blend of funk rhythm and free jazz improvisation.

His most recent tours included performances in Europe with Wadada Leo Smith and John Lindberg on one hand, and with Melvin Gibbs, Joseph Bowie, Vernon Reid, and James Blood Ulmer on the other.

(dates are recording, not release)

This article uses material from the article Ronald Shannon Jackson from the free encyclopedia Wikipedia and it is licensed under the GNU Free Documentation License.