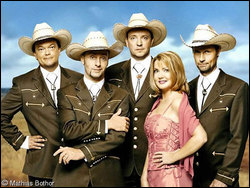 Texas Lightning is a German quintet from Hamburg which fits in the country music genre and describes itself as old fashioned and hip. Their music is a mix of country and pop drawing from country classic stars like Patsy Cline, Loretta Lynn, Johnny Cash and Tammy Wynette and pop stars such as ABBA, Nancy Sinatra, Linda Ronstadt, Madonna, Michael Jackson and the Beatles, performed with some country humour. The band members are Olli Dittrich as Ringofire (drums and vocals), Jon Flemming Olsen as The Flame (vocals and guitar), Markus Schmidt as Fastfinger (electric guitar and banjo), Uwe Frenzel as Friendly (doublebass and vocals) and Australian Jane Comerford (vocals and ukulele). The band's first performance took place on December 23, 2000, in the music club "Knust" in Hamburg, as Texas Lightning & The Rodeo Rockets, although there have been various changes in the lineup of the band since.

On March 9, 2006 Texas Lightning won the German heat for the Eurovision Song Contest 2006 and represented Germany in the Finals on May 20, 2006 in Athens, Greece. The winning song was "No No Never", written and composed by Jane Comerford. They became the first country band to participate in the ESC. The song finished 14th place with 36 points, much to Germany's surprise, as they expected a better outcome.

"No No Never" was released as a single in Germany, Austria and Switzerland. It reached number 1 on the German Media Control Charts, number 4 in Austria and number 6 in Switzerland.

Through a nomination by Steve Sivek of Baytown, Texas and the submittal by Texas State Senator Tommy Williams, the members of Texas Lightning were, by Proclamation 603 before the Texas Senate, declared to be Honorary Texans. The proclamation was passed by the senate in June 2006.

This article uses material from the article Texas Lightning from the free encyclopedia Wikipedia and it is licensed under the GNU Free Documentation License.

The Wind Cries Mary markusphilippe
Update Required To play the media you will need to either update your browser to a recent version or update your Flash plugin.